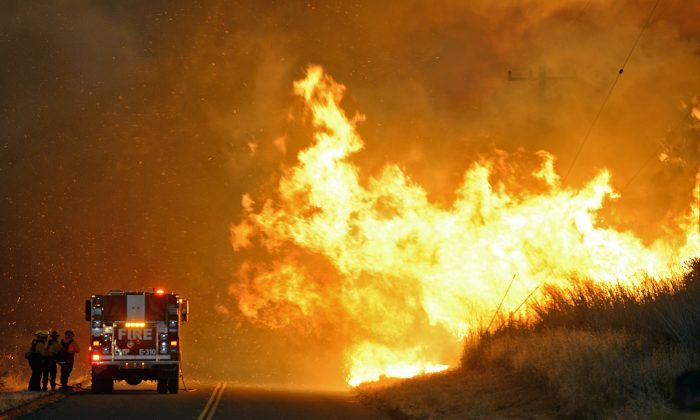 GOLETA, Calif.—Firefighters battling a California wildfire that forced the evacuation of campgrounds and ranches were struggling with strong overnight winds and bracing for rising temperatures as an extreme heatwave is expected to sweep across the Southwest this weekend.

The blaze—which shut down U.S. 101, the state’s major coastal highway, for two nights in a row—more than tripled in size Friday and had consumed 9 square miles of heavy brush.

The fire was 20 percent contained but so-called “sundowner” winds that rush down the mountains in 40 mph gusts were beginning to kick up again Friday night, fire officials said.

“It’s very hot and dangerous,” Susan Klein-Rothschild with the county health department said of the blaze. “The last couple of nights…it’s calmer during the day and the eruptions and explosions and expansions have happened during the night hours.”

Weekend fire dangers already were expected to worsen as the heatwave will bring potentially record-shattering temperatures across the Southwest.

Another fire erupted Friday afternoon in Northern California. The wind-driven blaze southwest of Sacramento quickly burned 200 acres of grasslands and prompted the evacuation of China Gulch, a tiny community in the historic Gold Country.

By evening, though, the fire’s forward movement had been stopped.

In central New Mexico, a blaze that began Tuesday had destroyed 24 homes and charred more than 26 square miles near the small community of Chilili.

“We’re seeing up to 100-foot flame lengths or more throughout the day,” Ottaviano said. “We’re fighting it as many ways as we can and as safely and quickly as possible.”

Authorities expanded a mandatory evacuation zone to include more subdivisions to the north and east. They could not say how many homes were affected or how many were directly threatened.

The fire cast a thick haze that reached as far north as Denver.

The California inferno appeared to support national wildfire authorities’ predictions of another dangerous and difficult year for the state after years of drought. State firefighters and the U.S. Forest Service already have fought more than 1,800 wildfires since Jan. 1, the California Department of Forestry and Fire Protection said.

While El Nino delivered rain and snow to Northern California this winter, the south was bypassed. What rain fell was just enough to sprout grasses that quickly died, adding to the danger of long-dead vegetation.

About 270 homes and ranches were considered at risk in southern Santa Barbara County at the foot of the rugged Santa Ynez Mountains, an east-west trending range that parallels the south-facing coast.

Lanny Stableford watched as a fleet of aircraft attacked flames in rugged Refugio Canyon near his ranch.

He keeps 40 head of longhorn cattle.

“I can leave but they won’t let me back so I’m just kind of hanging out here,” he said, noting he was not in danger. “Somebody has to take care of my cows.”

In east-central Arizona, progress was made against a 15-square-mile blaze that broke out Wednesday south of Show Low.

Crews deliberately burned thousands of acres to deprive the fire of fuel.

Much of the fire is burning in terrain too rugged for safe work on the ground, so crews have concentrated on clearing firelines along a highway, roads and a power line, said Rick Miller, the fire team’s operations section chief.

However, a small Navajo County community remained evacuated and thousands of other residents were told to be prepared in case they had to leave.