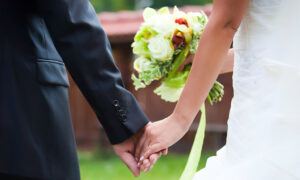 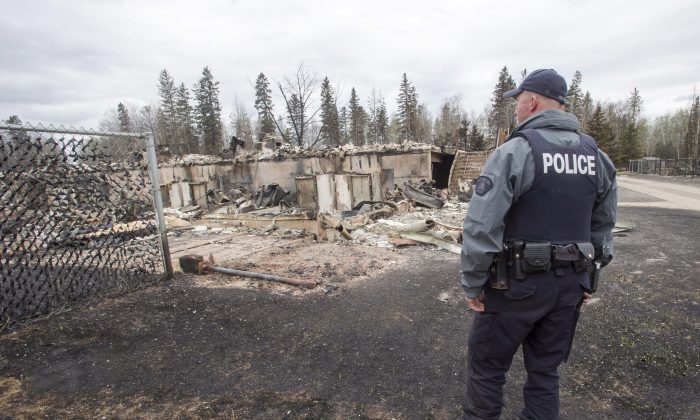 A police officer looks at the wildfire destruction in the Abasand neighbourhood of Fort McMurray on May 9, 2016. (The Canadian Press/Ryan Remiorz)
Canada

Firefighter Who Lost Home Vows to Rebuild in Fort McMurray

FORT MCMURRAY, Alta.—For firefighter Mark Stephenson, the Alberta oilsands capital is his home and he plans to rebuild on the same spot where his house went up in flames.

“I’m not leaving Fort McMurray. I’m a Fort McMurray firefighter,” Stephenson said Tuesday while helping clean up one of the city’s fire halls.

“I love this place. I plan on staying.”

With his voice raspy from days of breathing in smoke, the 43-year-old recalled how one week ago he helplessly watched his own house burn. He then stuffed away his emotions and went back to work.

He’s one of several city firefighters who lost their homes, but carried on to save other houses when a roaring wildfire spread into the city.

The blaze forced more than 80,000 residents to flee. About 2,400 buildings were torched, but 25,000 were saved, including the hospital, municipal buildings and schools. That’s a good 90 percent of the city.

Stephenson, a former Edmonton soldier who joined the fire department eight years ago, said he and his colleagues dubbed the fire “the beast” because of how quickly it spread.

I love this place. I plan on staying.
— Firefighter Mark Stephenson

“It was just all of a sudden flash heat and trees exploding and popping,” he said. “I’ve never seen anything like it in my life. It was alive and it was breathing and eating at a rapid pace.”

When he got to his neighbourhood of Abasand, Stephenson’s neighbours’ fences were on fire. He grabbed a chain saw from his garage and started cutting down the fences and nearby trees. When he discovered the fire hydrants had run dry, he and other firefighters used garden hoses but they were useless.

His captain made the call for Stephenson and his crew to retreat and regroup. When they later went back to try again to save the neighbourhood, Stephenson’s two-storey house at the end of the block was engulfed.

Stephenson said he was relieved that his wife, two children, a nanny, and dog had left. But all of their belongings were still inside. His cherished 1969 Pontiac Firebird was in the garage.

Stephenson stood at the end of his driveway, shot a quick video and took some photos.

He continued to beat back the blaze throughout the night before taking a quick nap in his pickup truck. He got no more than a couple hours of sleep in the days that followed.

On May 8, he returned to the scorched rubble where his home had stood and salvaged a ceremonial sword he received while serving in Kosovo. He also saved his four-year-old son’s piggy bank with coins still inside.

“It’s in my hotel room all duct-taped together,” said Stephenson. “My boy’s all excited about that because daddy saved his piggy bank at least.”

Stephenson’s wife, Kayla, is staying in Edmonton at her mother’s house with the kids while he remains on duty in Fort McMurray.

She was driving out of the city with thousands of others when her husband sent her the video of their burning home. She pulled over to the side of the road and watched in shock. Then she put on her happy mommy face and kept driving, she said.

Their two-year-old daughter is too young to understand what happened, she added, but she has since told their son, Jake, that “our stuff got wrecked by the scary fire.”

Stephenson said he’s only exchanged text messages and had quick phone calls with his wife, but will be going to Edmonton to see his family when he finally gets days off next week.

He expects the emotion that he’s bottled inside is likely to spill out then, along with tears.

“I’ve been fighting it back … but it’s coming.”