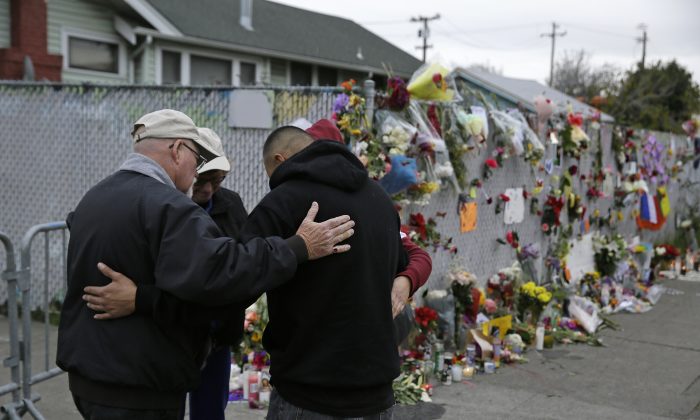 John Gaut, left, with the Billy Graham Rapid Response Team, leads a group in prayer near the site of a warehouse fire in Oakland, Calif., on Dec. 7, 2016. (AP Photo/Eric Risberg)
International

SAN FRANCISCO—The illegally occupied Oakland warehouse where dozens of partygoers perished in a blaze does not appear in a database fire inspectors use to schedule inspections and may never have been checked for fire hazards, a firefighter with knowledge of the situation told The Associated Press.

Oakland fire officials are supposed to annually inspect commercial buildings for fire safety, with only single-family homes and duplexes exempted, according to a city website. Officials typically pull addresses from a database to request the yearly checks, said the firefighter Thursday, who feared retribution for disclosing the information and spoke only on condition of anonymity.

“Commercial inspections are conducted as time permits during a fire station’s 24-hour shift and are not routinely scheduled on an appointment basis,” the city’s website explains.

There’s a fire station right around the corner from the warehouse, which Derick Ion Almena, a sometimes-photographer who rented the building and sub-leased living space to artists, had dubbed the Ghost Ship.

The victims, ranging in age from 17 to 61, died while attending a $10-a-head dance party at the warehouse. On the campus of the University of California at Berkeley on Thursday, family members and friends hugged one another and wept as they spoke of two students, two recent graduates and a campus volunteer who died in the blaze.

“There’s a part of our heart that’s missing today,” Michael Morris, father of 21-year-old victim Jennifer Morris, a musician and media studies major who died along with her roommate, Vanessa Plotkin, 21. Surrounded by the girl’s mother, older brother and cousin, Morris fought back tears. “She was so precious to us.”

The fire department and Mayor Libby Schaaf each said Thursday they could not yet say when — or if — a fire inspector examined the warehouse.

Fire department spokeswoman Rebecca Kozak said Thursday she didn’t know whether the warehouse’s address was in the database of buildings to be checked.

Kozak said she was processing 40 to 50 public records request from news media and that confusion over the warehouse’s address is slowing the process.

Erica Terry Derryck, Schaaf’s spokeswoman, said the mayor’s office was putting together “what contact all city agencies have had with this property.”

At a press conference Wednesday night, Schaaf said she had requested the information from the fire department, but had not yet received it. It was also disclosed then that building department inspectors had not set foot in the warehouse since at least 1986.

A civil grand jury in 2014 report said 4,000 out of 11,000 buildings in Oakland were going without the yearly inspections and concluded the city’s website inaccurately implied all commercial buildings received annual inspections.

The department agreed with the finding. It said an annual inspection for each commercial business was a goal but emergency responses and staffing made that more difficult.

Jon Narva, with the National Association of State Fire Marshals, said cities generally decide for themselves how frequently to conduct inspections and some places do use line firefighters to help with inspections.

The mayor said Wednesday night that the city will look to strengthen regulations for smoke alarms and exits and clarify city employees’ responsibilities to monitor unsafe structures.

The structure had been converted to artists’ studios and illegal living spaces, and former occupants said it was a death trap of piled wood, furniture, snaking electrical cords and only two exits.

City and state officials fielded complaints for years about dangerous conditions, drugs, neglected children, trash, thefts and squabbles at the warehouse, raising questions about why it wasn’t shut down. The district attorney has warned of possible murder charges as she determines whether there were any crimes linked to the blaze.

Federal investigators said Wednesday the fire started on the ground floor and soon was raging, with smoke billowing into the second level and trapping victims whose only escape route was through the flames.

Snyder said investigators were examining a refrigerator and other potential sources of the fire but had not reached any conclusions. She indicated it would be at least several weeks before the investigation was completed.

Almena has not responded to emails or calls by The Associated Press to phone numbers associated with him. He has said he didn’t attend the event Friday night, and that he is sorry.