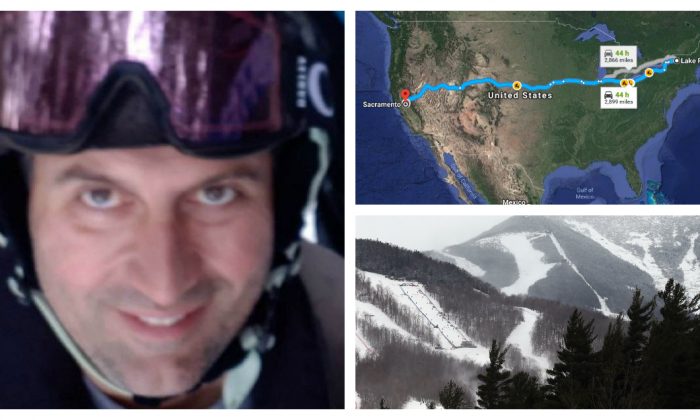 A bizarre six-day search and rescue operation for a Toronto firefighter on a ski trip in New York ended in the unlikeliest of outcomes when the missing person called his wife from Sacramento, California on Feb. 13.

Constantinos “Danny” Filippidis was on a ski trip with fellow firefighters when he went missing in Lake Placid, New York on Feb. 7. The extensive search uncovered nothing.

It is still not clear how Filippidis got to California from New York, although it is unlikely that he flew, according to Frank Ramagnano, president of the Toronto Professional Fire Fighters’ Association.

Toronto professional firefighters’ association president says Filippidis was found in California earlier this afternoon. He got hold of a cell phone and dialed the only number he could remember: his wife’s. His family is enroute to see him. @globalnewsto pic.twitter.com/J3rbsPmfj6

Ramagnano told Global News that Filippidis doesn’t remember how he even got the cell phone to call his wife and that his credit cards were not used.

NBC News, in speaking with New York State Police, reported that Filippidis was alone in Sacramento and that he had made contact with local police, but sounded confused and wasn’t able to give direct answers.

The elaborate search consisted of five different agencies and over 250 people in New York at the Whiteface ski resort working on the case.

“The circumstances regarding this case are under investigation, and further details will be released at a later time,” according to a New York State Police press release from Feb. 13.

Missing Skiier: Attention skiers/snowboarders at Whiteface Mountain: If you were skiing the mountain Wednesday, February 7, and saw this man, Constantinos “Danny” Filippidis, between the hours of 2:30-4:30 p.m, please call State Police at 518-873-2750. https://t.co/pyLNUIG6aC pic.twitter.com/P2WIyLzBNV

In times of tragedy, people come together and Ramagnano praised the local communities in New York for their efforts and for giving them free dinners and hotel rooms once they learned about the search.

Over 100 firefighters from Toronto made up the more than 250 people combing the mountain for Filippidis, a captain in the Toronto fire department.

“I am so proud of how our members came together,” Ramagnano told Global News. “Positive outcome that he’s alive and well.”