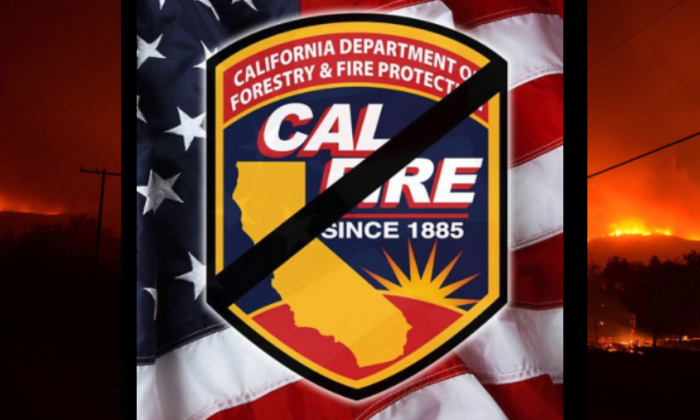 The Thomas Incident blaze consumed the life of a second firefighter on Dec. 14. (Images via Cal Fire / compositing by Tom Ozimek / Epoch Times)
Crime and Incidents

A San Diego firefighter was killed battling an enormous blaze in California—called the Thomas Incident—as it continues to burn in parts of California’s Santa Barbara and Ventura counties.

“I am very saddened to report that a firefighter fatality has occurred on the Thomas Incident,” a Cal Fire statement read.

No details on the firefighter’s death were provided in the statement, which was released on Thursday, Dec. 14, on the CAL FIRE Facebook page. In the statement, the serviceman was identified as a “CAL FIRE Engineer from the San Diego Unit.”

“Please join me in keeping our fallen firefighter and his loved ones in your prayers, all the responders on the front lines in your thoughts, as they continue to work under extremely challenging conditions,” said Pimlott.

Regional firefighting units are also weighing in with condolences.

“This is a sad day for all. We stand shoulder to shoulder with support for our brothers and sisters. Our prayers go out to the families and friends for our shared loss,” a Nevada-Yuba-Placer Unit statement reads.

“We stand strong to support our brothers and sisters to the south. Our prayers go to the family, friends and coworkers,” reads another from the Tuolumne-Calaveras Unit.

As of now, the Thomas fire has claimed the lives of two firefighters.

A series of Red Flag Warnings remain in effect in the south, extending into central California due to low chance of rain and high winds.

#RedFlagWarnings in effect across Southern CA extending up into the central part of the state due to low humidity and gusty winds. With no chance of precipitation forecasted fire danger remains high. #SantaAnaWinds in Southern CA will provide challenges. https://t.co/3Or0ygzF3r pic.twitter.com/fNSQpSpHvk

The 242,500-acre Thomas fire broke out as a brush fire on Monday, Dec. 4. In the last 10 days ablaze, the fire has destroyed 930 structures and damaged another 193, according to Cal Fire.

According to a Cal Fire statement issued on Thursday, Dec. 14, at 9:26 a.m., containment of the Thomas Incident blaze stood at 30%.

Below is a list of the 10 largest wildfires to take place in California after 1932, excluding the complex of wildfires in Northern California called the October Fire Siege. The list is based on a document prepared and published by Cal Fire titled ‘Top 20 Largest California Wildfires‘

And a final message from your friendly neighborhood news reporter. Please help support independent journalism by sharing this article far and wide on social media. Thanks!