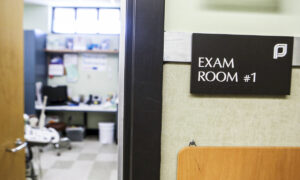 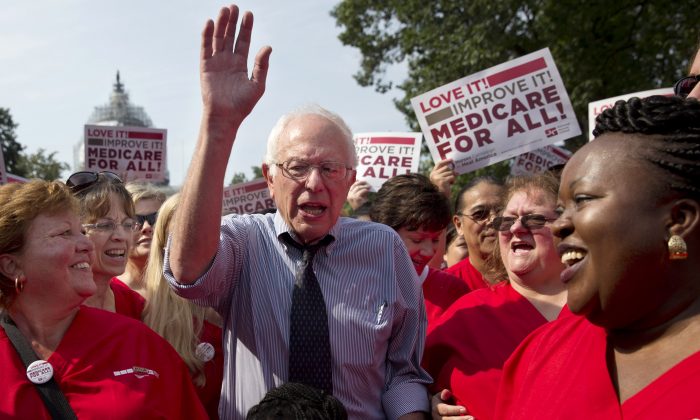 FILE - In this July 30, 2015 file photo, Democratic presidential candidate, Sen. Bernie Sanders, I-Vt., waves after speaking at a rally with registered nurses and other community leaders celebrate the 50th anniversary of Medicare and Medicaid, on Capitol Hill Washington. With the Obama administration counting down its final year, many Democrats are finding less to like about the president’s health care law, unsure about its place among their party’s achievements. Sanders’ call for “Medicare for all” seems to have rekindled aspirations for bigger changes beyond “Obamacare.” That poses a challenge for Hillary Clinton, who’s argued that the health care law is working and the nation needs to build on it, not start over. (AP Photo/Jacquelyn Martin, File)
Politics

Fired Up by Sanders, Democrats Shift Left on Health Care

WASHINGTON—With the Obama administration counting down its final year, many Democrats are finding less to like about the president’s health care law, unsure about its place among their party’s achievements.

Sen. Bernie Sanders’ call for “Medicare for all” seems to have rekindled aspirations for bigger changes beyond “Obamacare.” That poses a challenge for Hillary Clinton, who has argued that the health care law is working and the nation should build on it, not start over.

Two recent polls have shown an uptick in negative ratings of the Affordable Care Act, or ACA, and the shifting sentiments seem to come from Democrats and Democratic-leaning independents. For example, in the latest installment of the Kaiser Family Foundation health care poll, the share of Democrats with unfavorable views increased by 6 percentage points.

Underlying the unease seems to be a growing conviction that the law did not go far enough. About 27 million people remain uninsured, and many who gained coverage find it costly. Kaiser found that for the first time, a 51-percent majority of Democrats wants to expand what the law does, a sharp increase from the 36 percent who said so in December.

The health care law was a good start “but it doesn’t do all the things we need to have done,” said Rep. Jim McDermott, D-Wash.

“I think frankly Bernie’s campaign has stirred it up,” he added. A longtime advocate of coverage for all, McDermott is supporting Clinton.

Democrats’ shifting views could make things tricky for Clinton if she’s picked as the nominee over Sanders, which appears likely. Clinton established her commitment to covering the uninsured long ago, during the losing battle for health care legislation in her husband’s administration.

Going into the 2016 primary season, she cast herself as the candidate of continuity, promising to defend Obama’s health care accomplishments from repeal by Republicans.

“She can’t have so many people who are not excited about something and say ‘I’m going to continue it for eight more years,'” said Robert Blendon, a professor at the Harvard T.H. Chan School of Public Health, who follows public opinion on health care.

A Pew Research Center poll found that overall the public disapproves of the law by 54-44 percent, a change from last summer when it found Americans almost evenly divided. Part of the explanation was a 12-point drop in support among Democratic-leaning independents.

Kaiser’s April tracking survey found 49 percent of Americans had an unfavorable view of the health law, with 38 percent favorable. That showed slippage from a 47-41 split in March.

Among Democrats, the share of those with unfavorable views went up from 19 percent in March to 25 percent in April. “It’s being driven by the Democrats. That’s what’s so interesting here,” said Mollyann Brodie, who directs the Kaiser poll.

Many people covered by the law express mixed feelings.

Karen Rezny of Austin, Texas, says the health care overhaul has saved her life by allowing her to get better quality treatment for advanced breast cancer. She was uninsured when she was first diagnosed, and before the law passed, insurers would have rejected her because of her medical condition.

But as a massage therapist, Rezny struggles with the out-of-pocket costs. She’s still paying off bills from last year.

“I feel like the ACA is a step in the right direction, where a lot more work needs to take place,” said Rezny.

“There’s a problem with the name of the Affordable Care Act,” she added. “It is not affordable for some.”

Lodiza LePore, a photographer from Bennington, Vermont, is paying about $1,000 a year for a policy with a deductible of more than $3,000. The deductible is the share of medical costs individuals must pay each year before their insurance kicks in.

“You go to the doctor, and you think your insurance is going to cover it, and then you get billed,” she said. “You have insurance but you can’t really use it.”

Former Obama health care aide Ezekiel Emanuel agrees with Clinton that the health law is a success, but it needs more work.

“Some of the compromises and problems that are inherent in the way the ACA works are coming out, and solutions are needed,” Emanuel said. “There’s no resting on your laurels on this.”