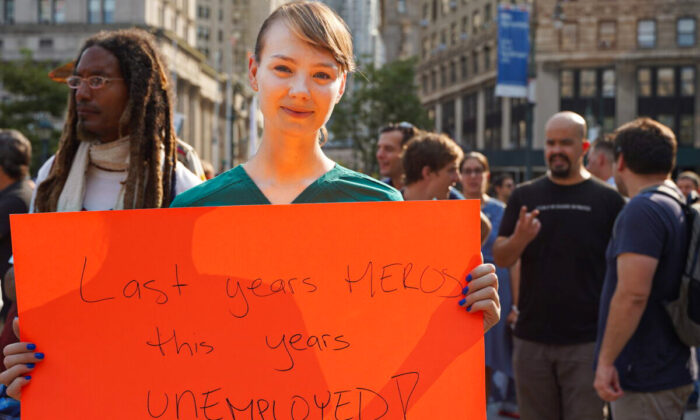 Many health care workers, once hailed as heroes for working throughout the pandemic, now settle into the holiday season without jobs because of their personal medical decisions.

In North Carolina, Carlton DeHart was working as an advanced heart failure coordinator nurse for the Novant Health Presbyterian Medical Center in Charlotte when she was fired in September for not meeting the deadline to get vaccinated for the Chinese Communist Party virus.

Because DeHart was undergoing fertility treatment, she told The Epoch Times, she decided against it, adding that she didn’t feel comfortable “adding a not-long tested unknown into my body.”

She chose not to file for an exemption because, she said, “it’s a form of compliance.”

She doesn’t regret the decision, she said, and with the reducing rates of efficacy, changing definitions of what it means to be fully vaccinated, increasing reports of side effects, and the censorship surrounding the COVID-19 vaccines, she’s “still determined not to comply.”

Though DeHart misses her team and her patients, she said doesn’t miss the “top-down draconian hospital politics” that pushes allopathic treatment.

Her hope is that the firings will propel a new medical community forward that doesn’t lean into the heavily prescribed drugs, radiation, and surgery but into more innovations outside of orthodox medicine.

“I think we were moving that way anyway because people weren’t happy with the corporate care they were getting, and this will hurry that along,” DeHart said.

‘I Never Bought Any of This’

In Indiana, Erika McCoy was a certified critical care nurse, as well as a COVID nurse for the last year and a half with the Community Health Network, where she worked for 19 years.

She also taught critical care to nursing students at the University of Indianapolis.

Before the vaccine mandates even began, she was fired in August for not wearing a mask.

“I never bought any of this,” McCoy said. “I knew everything was a lie from day one when they were telling us how to wear our PPE (personal protective equipment) properly because of this bat virus on the loose that they said came from a fish market down the street from a lab that weaponizes viruses.”

Vocal about her beliefs, she said she had already had a target on her back.

However, patients and students were relieved when she told them they didn’t have to wear a mask in front of her, she said.

In 2020, the hospital began restricting visitors.

“That was not OK with me,” McCoy said.

“Having visitors is good for the health of the patient,” she said. “Visitors who know the patient better than the nurse notice acute changes in the patient.  I can’t tell you how many visitors have tipped me off to acute changes I wouldn’t have noticed otherwise because I don’t know how they are normally.”

“The narrative didn’t sit well with my gut,” she said.  “I didn’t need a study to tell me that my CO2 (carbon dioxide) levels increased in my body with wearing a mask for 13 hours a day. I just knew it was wrong the second it was on my face. We are not meant to live that way.”

Since being fired, life has been stressful, she said, but she’s found a new mission in studying constitutional law.

“I’m a single mom so I worry about income, but I told them when I left, ‘You’ve taken away my job. Now I’m going to expose you,’” she said.

McCoy is studying the affidavit process by bringing justice through statements of fact, she said, and she’s also teaching the process.

“It’s extensive, which is why I think many people aren’t doing this,” she said.

However, McCoy said she shouldn’t have to quote U.S. or state code to declare her body as her property.

“There is no man, no institution, no government, or any other person who can make me put anything on or in my body that I do not agree to,” she said.

For those who complied, McCoy said, the goalpost will only keep moving forward as freedoms continue to be subtracted from the people.

“If we give up now, it will just keep going and going,” McCoy said. “Once freedom is taken, it isn’t given back.”

In Virginia, Ethan Craig, a physician’s assistant, prepares to uproot his family and move to Florida where he has a potential job offer after being fired in September for not taking the vaccine, he told The Epoch Times.

As a member of the National Guard, he was able to get a full-time position with the military reserve force after he was fired before the Virginia state National Guard implemented its own vaccine mandate, ending his active-duty orders, which didn’t remove him from the Guard but caused him to lose his second job this year for not getting vaccinated.

Craig had worked at an Ear, Nose, and Throat clinic where he said his medical director had been strongly encouraging the vaccine.

When the vaccines rolled out, Craig said two of his older siblings who were as doctors eligible for the first round developed severe reactions after receiving their two doses of Moderna.

In his clinic, he said a coworker developed neuralgia in both upper extremities after the shot, while a female patient in her 50s suffered a heart attack six hours after her shot.

Another female patient broke out in an autoimmune rash on her torso that he said plagued her with pruritus.

Another middle-aged female patient he said developed tinnitus after her vaccine that interfered with her daily life.

“All of these women were healthy and very low risk to any side effects from COVID,” Craig said.  “It’s one thing to read all of these studies that show the dangers and ineffectiveness of the COVID shot while reading about the benefits of multiple therapeutics, but it’s another thing to know several people in my own circle on this small peninsula of Virginia that have suffered from side effects from the shot.”

When he brought this to his medical director’s attention, Craig said he discounted them.

Still, Craig said, the medical director sent out an email to staff blaming the outbreak on the unvaccinated.

“Our government and the CDC have successfully convinced some of the smartest people in our communities to fear a virus that has a 98.4 percent recovery rate,” Craig said.

When Craig came down with COVID, he said he treated it with ivermectin and the symptoms lasted two days.

After the entire staff tested positive, the medical director mandated the vaccine, and Craig agreed to get vaccinated under the condition that the company would pay for all medical bills for any side effects.

“Doesn’t this sound like a perfectly reasonable condition, especially if you have complete faith in the safety and efficacy of the COVID-19 shot?” he asked. “I’ll let you guess what he decided.”

Craig and his wife, a teacher, now look forward to Boynton Beach, Florida, where he’s been offered a job at an Ear, Nose, and Throat clinic that isn’t mandating the vaccine.

“Everywhere else hiring required the shot, so it looks like we are going to a state that has medical freedom,” he said.

Still, it’s not just Craig who was impacted by the job loss.

His wife now must change schools and find a new community.

Though they don’t have kids, Craig pointed to the children of parents who lost their job this year because of the mandates and what it must be like for them during the holiday season.

For Craig and his wife, the job offer is a relief, while for many, he said, they continue to struggle because of a government and employers who are denying people their 14th Amendment right to life and liberty, as well as to bodily autonomy.

“They insist that to protect the vaccinated from the unvaccinated, they must coerce everyone to get the jab or remove dissenters from society,” Craig said.

However, in quoting founding father Benjamin Franklin, Craig said, “Those who would give up essential liberty, to purchase a little temporary safety, deserve neither liberty nor safety.”