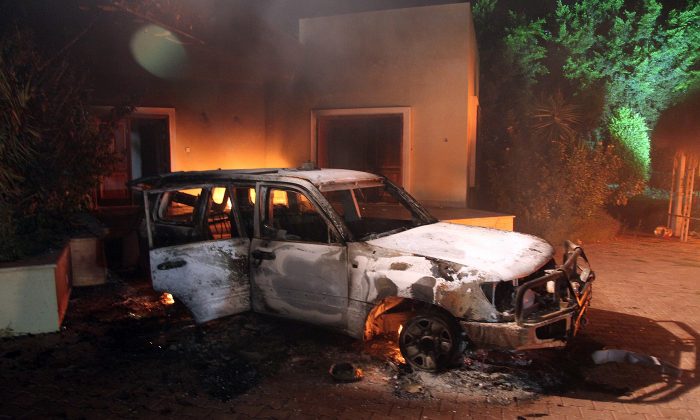 A vehicle and surrounding buildings smolder after they were set on fire inside the US consulate compound in Benghazi on Sept. 11, 2012. An armed mob protesting over a film they said offended Islam, attacked the US consulate in Benghazi and set fire to the building, killing one American, witnesses and officials said. (STR/AFP/GettyImages)
US

WASHINGTON (AP) — A former investigator for the House Select Committee on Benghazi says he was unlawfully fired in part because he sought to conduct a comprehensive probe into the deadly attacks on the U.S. compound instead of focusing on Hillary Rodham Clinton and the State Department.

Air Force Reserve Maj. Bradley F. Podliska discussed his allegations with The New York Times and CNN. The newspaper on Saturday posted a story based on a draft of a legal complaint he said he plans to file in federal court. CNN released a story about Podliskaahead of an interview airing Sunday on its morning program “State of the Union” and also had a draft of the complaint.

Podliska, who described himself as a Republican planning to vote for the GOP nominee for president, said the House committee was engaged in a partisan investigation of the Benghazi attack. Four Americans, including the U.S. ambassador to Libya, were killed when the consulate came under fire on Sept. 11, 2012.

Podliska said the committee turned all of its attention to Clinton and the State Department after it was revealed that she used a private email server as secretary of state. The move de-emphasized other agencies involved with the attacks and their aftermath, according to a draft of the complaint.

Clinton, the front-runner for the Democratic nomination for president, and her supporters have accused House Republicans of trying to use the Benghazi committee to hobble her campaign. She recently called it “nothing but a partisan exercise.”

In a statement, the committee denied Podliska’s accusations and said it “will not be blackmailed into a monetary settlement for a false allegation made by a properly terminated former employee.” The committee also said that Podliska had shown bias in his investigative work.

Podliska was fired after 10 months on the committee. He disputed what he said were the reasons given for his termination: using work email to send a social invitation to colleagues, assigning an “unauthorized project” to an intern and allegedly putting classified information on an unclassified system. He contended that another reason he was fired was for taking leave because of a deployment; such a dismissal would be illegal.

House Majority Leader Kevin McCarthy recently linked the committee’s work to Clinton’s sliding poll numbers and drew a rebuke from Republicans and Democrats. The California Republican stepped back from those remarks, but they damaged his effort to become the next House speaker and he dropped out of the race to succeed outgoing Speaker John Boehner.