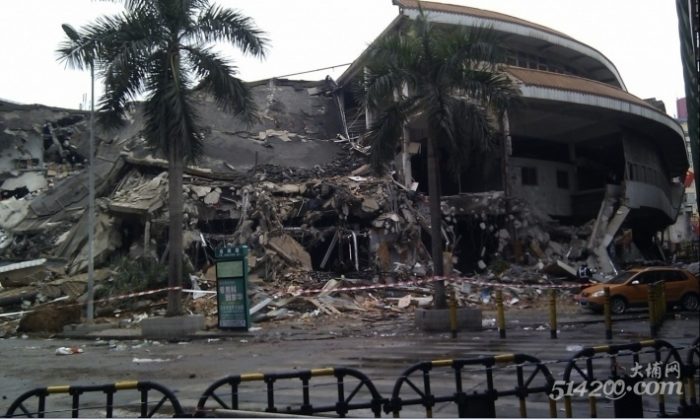 Buji Market in Shenzhen, Guangdong Province, was demolished by a hired, armed mob of 1,000 on Chinese New Year's Eve under the sound of firecrackers and without shopkeepers being notified. Jan. 23, 2012. (514200.com)
China

Forced demolition in China has been taken to a new level. Nearly one thousand Chinese shopkeepers lost their businesses in the early hours of Chinese New Year’s Day.

Under the cover of firecrackers, a mob hired by a local real estate developer, backed by local officials, turned an entire shopping mall in the southern metropolis of Shenzhen into rubble–without any prior public announcement or notification of shop owners.

Between 1:00 am and 2:00 am on Jan. 23, real estate developer Shenzhen Bangzhao dispatched what eyewitnesses called “a mob” of nearly a thousand armed people to carry out the forced demolition of Buji Market in Shenzhen, Guangdong Province. They set off firecrackers–a tradition to welcome the Chinese Lunar New Year–to cover up the sound of heavy equipment tearing down the three level, 10,000 sq. meter building that was holding nearly 1,000 shops.

When people woke up the next day, they found half of the market collapsed, with jewelry, cell phone, shoe, and grocery stores buried under the debris.

Some shop owners who had tried to stop the demolition were reportedly beaten and stabbed, and many were sent to the hospital.

A large number of police also arrived in the morning. Buji Street administration posted an announcement saying the police had arrested six forced demolition crews as well as the person in charge, and had established a special task force to handle the incident.

But this statement may have just been intended to deflect people’s outrage and stop anyone from staging a protest.

Chinese New Year is the biggest holiday in China, with families far and near getting together, sharing food, enjoying each other’s company and a break from their hard every-day lives. Firecrackers are supposed to drive away evil spirits and welcome a bright New Year.

Mrs. Huang told The Epoch Times that firecrackers are usually set off at 11:30 pm on New Year’s Eve, and they die down after an hour. But near Buji Market, firecrackers continued till 2:00 am, disturbing the neighborhood. But while there were sounds of machines mixed in, most people really suspected nothing of this sort.

Mr. Wang, a resident who witnessed the demolition, said around 1,000 people moved to the scene while the firecrackers were going off. They blocked the road and then brought in two large cranes and four excavators to demolish the shops. Merchandise was all buried under the rubble.

A netizen named ‘zawick’ wrote on Baidu’s BBS: “At the time, my father suddenly got a call from a friend, saying our store was being demolished. My father rushed there immediately, but our store was already under the debris. The shop owners were severely beaten when they tried to stop them.

“My father saw a person lying on the ground, not moving, with blood running from his nose, so he yelled, ‘someone is dying, stop the beating.’ The lunatic mob then turned and hit my father on the shoulder. My father fell to the ground and was further beaten. He was lucky to escape to safety, but he felt dizzy and was taken to the hospital. He was then diagnosed with heart disease, and was in serious condition.”

Netizen Li Hua said on his Weibo: “On the morning of Jan. 24, Shenzhen Longgang police detained over 200 Buji Market shop owners. By 6:00 pm, people who were detained at Henggang police station had not been given any food.”

Attempts to contact Shenzhen Longgang police station failed, as no one answered the phone. Staff at the Buji Street Administration Office declined to answer questions.

Buji Market, located in Shenzhen’s Longgang District, was build in 1991 with a projected operating life of 50 years. After 20 years of development, the area has transformed from an isolated region into a prime shopping strip. The building has been marked for demolition as part of Shenzhen’s urban transformation project for some time, but because of compensation disputes between the developer and shop owners, the demolition had been delayed.

Mr. Wang, the resident who had observed the demolition, said Bangzhao had attempted to demolish the market last October. Many Buji Market storeowners were violently beaten, threatened, and three were injured.

“Local police does not uphold justice, and the media does not report the truth,” he said, adding that if the government were not backing the developer, no one would dare to send a thousand people during the night to carry out a forced demolition.

“Such a large-scale project couldn’t have been done in a few hours. This whole thing was planned by the government; the Bangzhao was simply doing what it was told,” Wang said.