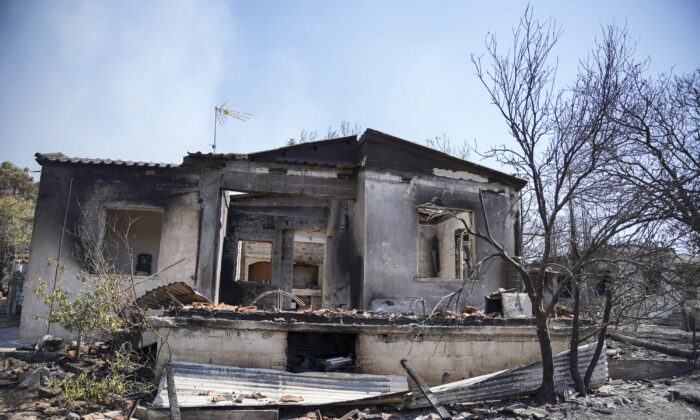 A burnt house following a forest fire near the beach resort of Vatera, on the eastern Aegean island of Lesbos, on July 24, 2022. (Panagiotis Balaskas/AP Photo)
Europe

ATHENS, Greece—Fire Service and municipal crews dug firebreaks outside evacuated villages on the Greek island of Lesbos early Monday halting a wildfire that had threatened scores of homes, authorities said.

The overnight work, using excavators and other heavy machinery, took place before six water-dropping planes returned to the southern coast of the eastern Aegean Sea island where the fire was burning for a third day.

A major fire in the southern Peloponnese region prompted the evacuation of six villages Sunday, but conditions have improved and the blaze was contained in areas where homes had been threatened.

At the Dadia National Park, in the northeast of the country, a wildfire burned for a fifth day. Special operations firefighters were needed to access areas where firebreaks were being set up but fast-changing winds were hampering that effort.