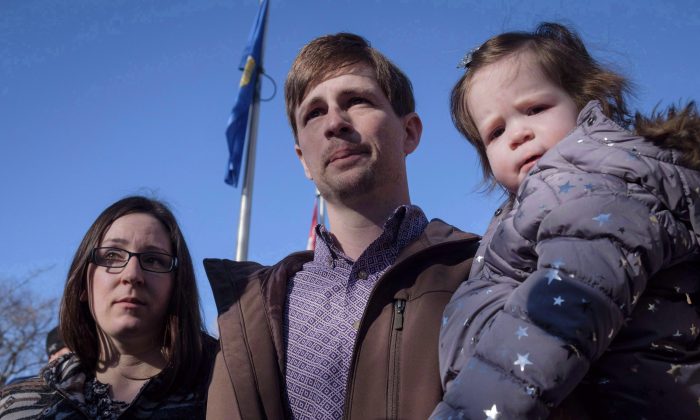 Edouard Maurice, centre, speaks to reporters outside court while holding his daughter Teal as his wife, Jessica, looks on in Okotoks, Alta., on March 9, 2018. (THE CANADIAN PRESS/Jeff McIntosh)
By Georges Hebert

Charges were dropped today against Alberta landowner Edouard Maurice, who was accused of shooting at trespassers on his property near Okotoks on Feb. 24.

Maurice fired a warning shot when he saw two individuals rummaging through vehicles on his property. The two trespassers, Ryan Watson—whose arm was injured by the shot—and Stephanie Ann Martens, were arrested along with Maurice.

According to media reports, Maurice’s lawyer Tonii Roulston argued that her client didn’t aim at the trespassers and that Watson was hit by a ricochet.

The case was dismissed on account of forensic reports that didn’t incriminate Maurice.

Maurice’s supporters at the Okotoks courthouse cheered as the charges were dropped.

Each time Maurice appeared in court, a crowd of supporters gathered outside. They expressed their concerns about rural crime and the lack of political action to address it.

Maurice said he was glad his case could help raise awareness about the issue. His wife, Jessica, said she hopes rural crime will become an election issue in Alberta, according to the Calgary Herald.