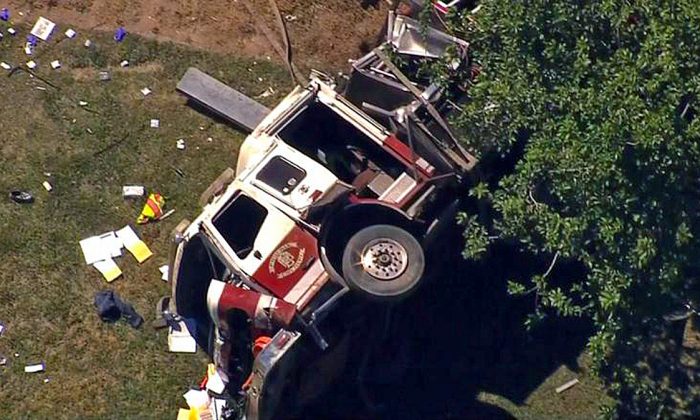 An aerial view of a Phoenix Fire Department truck that crashed into a pickup truck in Phoenix, Ariz., on April 7, 2019. (Courtesy of CNN/KTVK/KPHO)
Crime and Incidents

A baby and two parents are dead after a horrific crash involving a fire truck in Phoenix, Arizona, on April 7.

Phoenix Police Department confirmed that a male driver died when the pickup truck he was traveling with his family in crashed into a fire truck shortly after 9 a.m. local time at the intersection of 29th Avenue and Bethany Home Road.

The woman and baby, who was in a baby seat in the rear, were also critically injured and health professionals failed to save them.

“The adult female and the child were transported to hospitals and they have since been pronounced deceased,” Lewis said. “Our minds our thoughts our prayers are with the family. We did lose to the three members of the community in these collisions and very, very tragic.”

The fire engine was on the way to an emergency fire call with lights and sirens turned on. The accident happened at an intersection on 29th Avenue that was marked by stop signs without a traffic signal.

TRAGIC CRASH: Officials say the Phoenix fire engine was on its way to an emergency when it collided with a pickup truck. Three people were killed, including a six-month-old baby. https://t.co/GLHwzBXmLE

What we know about a crash involving a Phoenix fire truck at 29th Avenue and Bethany Home Road: https://t.co/tmVH0vgp6k
-A 6mo baby and two adults in a pickup have died
-3 firefighters were injured but are stable
-The fire truck rolled over pic.twitter.com/XfCfpbXgem

Lewis said the wreck showed evidence of “extensive damage” but it is unknown exactly what caused the accident.

“I don’t have any information as far as cause, whether or not speed was a factor, but the fire truck did roll quite a bit,” he said. “It is no longer on the road way.”

The three firefighters were also hurt, with two initially described to be in a critical condition at hospital. One of them has been released while the two others stayed overnight.

“They are stable at this time,” Lewis said.

He confirmed that the firefighters will receive assistance to help them recover from the incident.

“Help is being reached out to our employees. It’s available throughout the city for all of our employees and we understand that this type of situation is not only hard when you’re dealing with civilians, especially children, but [also] when you as an emergency responder roll on a scene,” he said. “We want to be sure that we reach out to those employees and to let them know that help is there and available at this time.”

A major difficulty in investigating the cause of the accident is there are now three fewer witnesses.

“We’re talking about a family, an adult male and female and small child that we no longer have to witness,” Lewis said. “That’s going to not only weigh on us but we are going to do our due diligence when we investigate this.”

Police temporarily closed Bethany Home Road between 27th Avenue and 31st Avenue for a few hours after the crash, including ancillary streets to the north and south that are marked with stop signs.

“This will remain in place for the next several hours as we investigate we have members of our vehicular homicide unit on scene,” Lewis said at the time. “They’re going to take a look at physical evidence [and] witness testimonies to try to work backwards [and] reconstruct what took place.”

The mother of the adult male victim, is inviting people to help raise funds to cover the cost of a memorial for the family.

“We are raising money for my son, grandson and his girlfriend who were involved in the fatal accident on Sunday, April 7th on 29th Ave and Bethany Home,” Sara Wilson Collins said on her Gofundme page. “Thank you for your thoughts and prayers.”