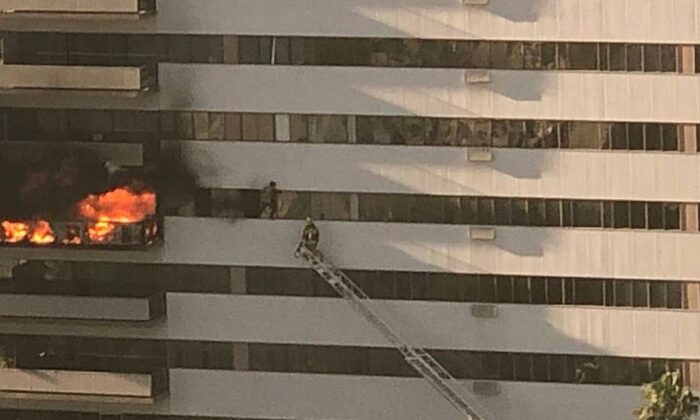 A Los Angeles firefighter on a ladder is seen trying to reach a desperate resident clinging to the buildings edge in Los Angeles, Calif., on Jan. 29, 2020. (Los Angeles Fire Department)
US News

At least eight people were injured, including a 3-month-old baby, in a Los Angeles high-rise fire on Jan. 29, the city’s fire department said in a statement while adding that the fire was started under suspicious conditions.

Officials said the majority of those who were injured suffered from smoke inhalation, six were hospitalized, and one person was in “grave condition,” according to the fire department in a statement.

Fire officials added that while there were reports of people “jumping” out of the high-rise building’s windows to escape the fire, “we surmise that such person/s may have appeared, disappeared (returned briefly inside) and returned to the building’s exterior in an area heavily charged with smoke.”

The eyewitnesses likely believed the person “had jumped rather than temporarily retreated into the building. It is likely the jumper/s in question was the man later safely rescued by an LAFD Firefighter atop an extended aerial ladder.”

“We had two people who had contemplated jumping,” Deputy Chief Armando Hogan told USA Today. “No one jumped. There are no fatalities at this incident.”

Puja Oza, a resident, told The Associated Press that they saw a man on the building’s edge before he was rescued.

Terrazas told KTLA that helicopters were used to rescue residents.

“We have rarely done rooftop evacuations,” said Terrazas. “It’s a valuable resource for our helicopters. They worked effectively. Very successful.”

No firefighters were injured in the incident, according to the fire department. An investigation is underway.