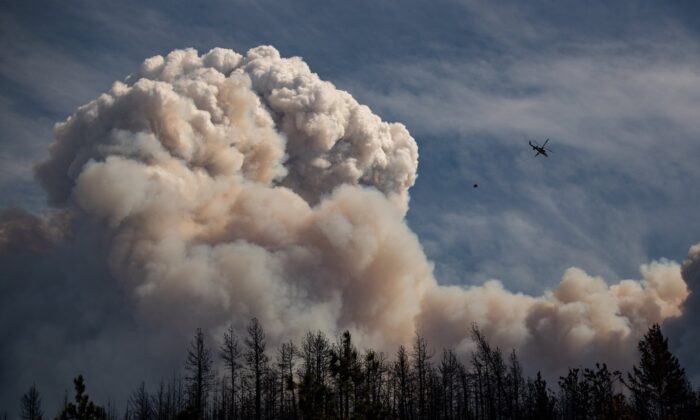 A helicopter carrying a water bucket flies past a pyrocumulus cloud, also known as a fire cloud, produced by the Lytton Creek wildfire burning in the mountains above Lytton, B.C., on August 15, 2021. (The Canadian Press/Darryl Dyck)
Canada

The Insurance Bureau of Canada says there is now a path to begin the recovery for Lytton, B.C., almost a year after two people died and most of the community was destroyed by a wildfire.

A statement from bureau vice-president Aaron Sutherland says debris removal is starting on insured properties in the village, raising hopes that Lytton will “soon return as a thriving community.”

Sutherland says insurers supported a “respectful, responsible and timely” approach to debris removal because they recognized the likelihood that Indigenous artifacts might be found.

Sutherland says the pace of recovery for those communities has been much faster, with debris removal mostly complete and reconstruction of insured properties well underway.

He says last year’s wildfires were the second-worst on record for insured losses, trailing only the 2003 wildfires that destroyed hundreds of home in Kelowna and north of Kamloops.

The slower pace of recovery in Lytton was partly due to the additional costs linked to the archeological work needed to find and preserve any Indigenous artifacts, says the statement from the Insurance Bureau.

Archeological work is not covered by insurance and the B.C. government funded a portion of that work on both insured and uninsured properties, which the bureau says ensures residents don’t face additional costs.

“Canada’s insurers are eager to rebuild the homes and businesses in Lytton,” says Sutherland.

The provincial government has been a critical partner in kick-starting the recovery process, which he describes as frustrating for residents and “unlike any post-disaster reconstruction effort in Canadian history.”

“We are now at a point where we can turn frustration into hope that the Village of Lytton will thrive once again in the very near future,” said Sutherland.