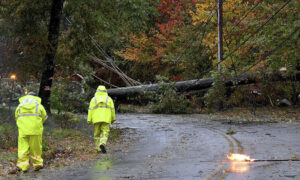 The Glencoe Valley Fire in the foothills of Jefferson County near Golden, Colorado has prompted sheriff’s officials to send out pre-evacuation notices in one neighborhood.

The fire is holding at four to six acres, the Jefferson County Sheriff’s Office said via Twitter at 7:31 p.m. The office will monitor the situation overnight.

Sheriff’s officials say a notice to be ready to leave went out Monday afternoon to 252 phones for residents in Blue Mountain Estates, northwest of Ralston Reservoir. It’s not clear how many people that represents, since some homes receive notices to more than one phone number.

Firefighters are on the scene preparing water hoses and other defenses near homes potentially in the fire’s path, and a helicopter is at the scene. Five agencies are working together.

There was no immediate word on what caused the fire.