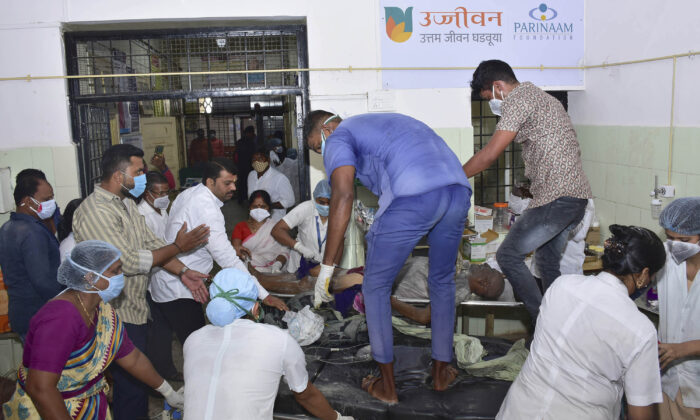 A man is carried for treatment after a fire in a hospital's COVID-19 ward that caught fire in Ahmednagar, in the western Indian state of Maharashtra on Nov. 6, 2021. (AP Photo)
India

NEW DELHI—Eleven patients died Saturday after a fire broke out in a hospital’s COVID-19 ward in the western Indian state of Maharashtra, police said.

There were 17 patients in the ward in the city of Ahmednagar where the fire started, said police Inspector Jyoti Karkade. The remaining six patients are in stable condition, she added.

While the fire has been brought under control, the cause was not immediately clear. Officials said they will carry out an investigation.

The former chief minister of the state, Devendra Fadnavis, took to Twitter to express his condolences and called for “strict action” against those responsible.

Such incidents are not uncommon in India. In May, when the country was battling a devastating surge in coronavirus cases, a fire in a COVID-19 ward in western India killed at least 18 patients.

Poor maintenance and lack of proper firefighting equipment often cause deaths in India.