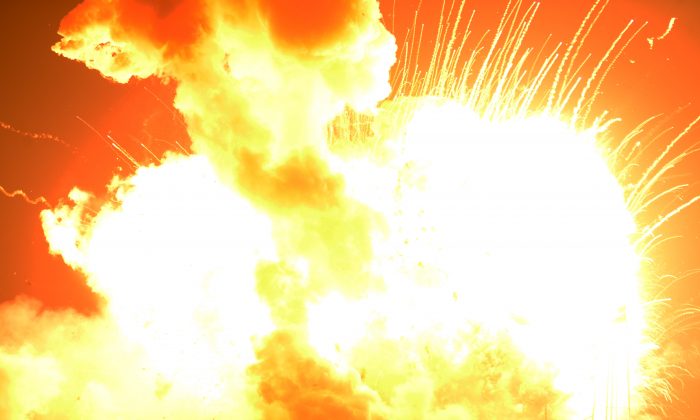 FILE - In this Tuesday, Oct. 28, 2014 file photo, an unmanned Orbital Sciences Corp.'s Antares rocket headed for the International Space Station explodes shortly after liftoff at Wallops Flight Facility on Wallops Island, Va. In a report released in October 2015, NASA's independent review team said a fire and explosion in a rocket engine are to blame for the failed space station shipment last October. (Jay Diem/Eastern Shore News via AP)
US

CAPE CANAVERAL, Fla.— A fire and explosion in a rocket engine are being blamed for a botched commercial space station shipment last October.

NASA released an investigation report this week, a full year after the Virginia launch accident.

NASA’s independent review team said the initial fire was caused by friction from rubbing parts in a liquid oxygen turbopump. The pump was in one of the old Russian-built engines of Orbital Sciences Corp.’s unmanned Antares rocket.

The pump exploded seconds after liftoff on Oct. 28, 2014, damaging a second engine, according to the report issued Thursday. The rocket lost thrust and fell toward the ground. Launch controllers sent a destruct signal just before impact to minimize damage. Even so, the Wallops Island launch complex was ruined.

Repairs only recently were completed. Testing and certification of the launch pad continues, while the Antares remains grounded.

Orbital Sciences — now Orbital ATK following a merger — was hired by NASA along with the SpaceX company to deliver supplies to the International Space Station.

In an unfortunate twist, California-based SpaceX also is grounded following a failed launch in June from Cape Canaveral. SpaceX said a snapped strut in its Falcon rocket’s upper stage caused the accident.

To chip away at the supply backlog until the Antares is flying again, Orbital has purchased a United Launch Alliance Atlas V rocket to make a space station delivery in early December from Cape Canaveral.

NASA said it’s unclear why the turbopump failed, but identified three possible causes: poor design; manufacturing or workmanship defect; or debris that somehow got inside. It could have been any one or a combination of factors, the report stated.

Virginia-based Orbital is replacing these kerosene engines — which were made decades ago near Moscow — with newer different engines, also made in Russia. The company needs to carry out thorough testing before the next Antares launch, the NASA review team urged.

Orbital expects to resume launches in 2016. SpaceX, meanwhile, hopes to be back launching by year’s end.