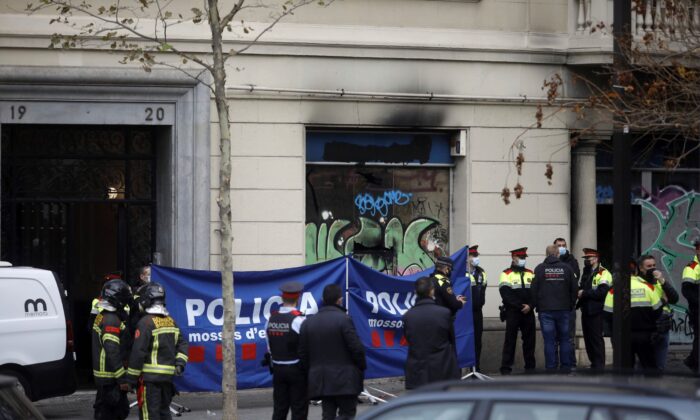 Policemen and firefighters work at the scene where a fire broke out in a building, in Barcelona, Spain, on Nov. 30, 2021. (Kike Rincon/Europa Press via AP)
Europe

Fire in Barcelona Kills Family of 4, Including 2 Children

MADRID—A fire in part of a building occupied by squatters in central Barcelona killed four members of the same family, including two children ages 1 and 3, on Tuesday morning, a local government spokeswoman said.

Firefighters managed to extinguish the blaze after rescuing four more people, who are being treated for smoke inhalation, the Barcelona city hall spokeswoman said. She said that no other people are believed to be trapped inside.

The fire was reported to authorities at 6 a.m. Tuesday, she said. The floor where the family died used to be the offices of a bank, but had been squatted in a practice that some vulnerable families resort to when they are unable to pay for accommodation.

A regional police spokesman told The Associated Press that an investigation has been opened into the causes of the fire.

Neither spokesperson was authorized to be identified by name in media reports.