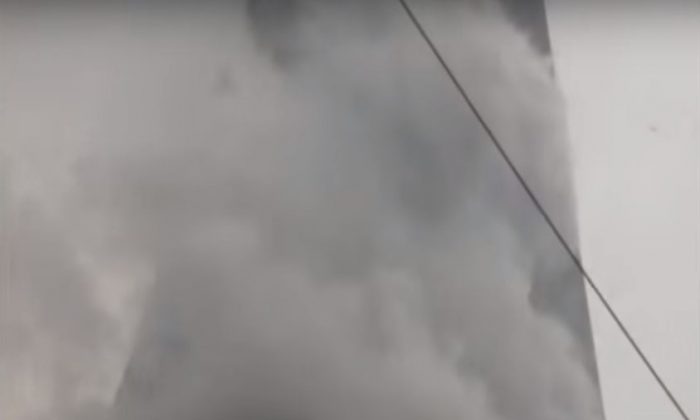 At least five people were injured during a fire in Chicago’s Hancock tower, a skyscraper located downtown, according to reports.

The fire broke out on the 50th floor of the John Hancock Center on the afternoon of Nov. 21, officials told the Chicago Tribune.

None of the injuries were considered serious, officials said at a news conference. They said one person was taken to Northwestern Memorial Hospital. Among those injured was a police officer who suffered smoke inhalation.

The cause of the blaze–which was fought as snow fell down on the city–was not determined, officials said.

Two patients were said to be in good condition and three were in stable condition, the Chicago Fire Department told NBC News.

The fire is believed to have started in a bedroom on an apartment, Deputy Fire Commissioner John McNicholas said, according to the broadcaster. The resident of the apartment made it out safely. The Chicago Sun-Times reported that while the fire is under investigation, it has been deemed accidental. Residents on the 50th floor will be displaced until repairs are done.

According to DNAInfo, the Hancock Center fire was extinguished after about an hour.

The large, 100-story building was not evacuated during the blaze even though around six ambulances were called to the scene, said NBC Chicago.

“I went into the hallway and there were other neighbors who smelled smoke,” Mary Minow, who lives in the unit above where the fire started, told ABC Chicago. “The elevator didn’t work, so we went five (flights of) stairs, down to 44 and that elevator took us down.”

The John Hancock Center, which was built in the late 1960s, is around 1,127 feet tall. It’s the fourth-tallest building in Chicago and the seventh-tallest in the United States.