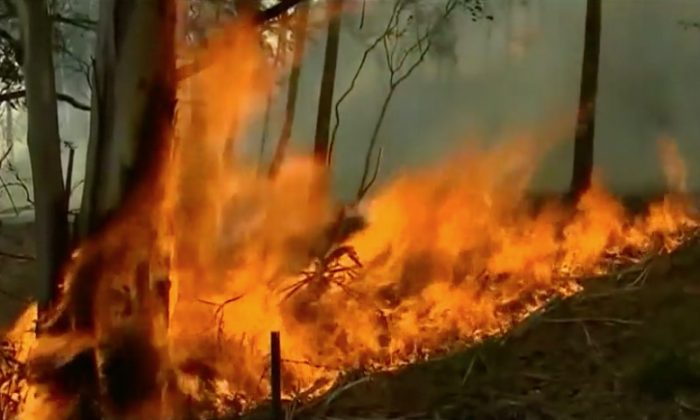 Bushfires in the Huon Valley in Tasmania, Australia on Jan. 30, 2019. (Reuters)
Australia

A bushfire in southwest Tasmania is burning closer to the Arthur Ranges after being fanned by winds.

Winds have pushed a massive bushfire towards one of Tasmania’s most rugged and spectacular mountain ranges, as crews hope rain brings much-needed relief.

Some weird and slightly scary fire/smoke tornado at #Liawenee #Tasmania by #MichaelBrooks pic.twitter.com/w7AcoHCOID

Cooler weather on Wednesday aided the fire battle across much of the island state but a blaze in the southwest moved closed to the Arthur Ranges.

“Unfortunately prevailing winds pushed the western edge of the fire towards the Arthur Ranges,” the Tasmania Fire Service said.

“The spread of the fire in this area will be monitored where possible over the coming days.”

Information from @TasmaniaPolice about plans to reopen bushfire-affected roads when safe to do so. https://t.co/kMIjECHScj

Rain is expected across the state on Thursday, with falls of up to 30mm in some areas, but authorities have said it won’t be enough to put all the fires out that have been burning for weeks.

Ahead of the rain, Tasmania’s health department issued a warning for properties using water tanks, as ash and debris from the bushfires may contaminate the supply.

Incredible photos from the Tasmanian bushfires 1. Miena by Alex Eldridge 2. Tahune Forest Airwalk by Matt Davis 3. The Great Pine Tier fire by Alex Eldridge 4. The view from a shack at Miena by Heath Holden #Tasmania pic.twitter.com/CXRipVQ2Wl

Residents are advised not to drink rainwater, or give it to pets, if it smells, tastes or looks unusual.

A fire at Brittons Swamp was fanned by strong westerly winds and pushed towards Waratah Plain in the state’s northwest.

.@TasFireService have included areas south of Scotchtown in the ‘Watch and Act’ message for Brittons Swamp. More info at https://t.co/ngkTONkU9O or https://t.co/WukOQORhHe #Tasfires

Firefighters’ efforts were again hampered by a rogue drone flying above a blaze.

Aerial fire crews had to competing for airspace as the device, being operated on Poatina Road in the state’s Central Highlands, hovered above the fire ground.

“Water bombing aircraft need to fly at low altitudes, a task made more difficult with the added risk of a drone strike. Essentially, if you fly a drone they can’t fly at all,” Tasmania Police said in a statement.

Summer in Oz is amazing but it also brings some of the worst natural disasters. ~3% of my home state of Tasmania has been/is currently on fire; that’s 1900 sq km, or 1.5 x size of LA. It’s because of the amazing emergency workers that no lives have been lost. #heroesdontwearcapes pic.twitter.com/JC7V2KDbgP

The news follows reports earlier this week, in January and at Christmas that drones were flying near fires.

The fires, some of which were sparked before Christmas, have destroyed seven homes in the Huon Valley, southwest of Hobart, and on the Central Plateau.

#NOAA20 spotted plumes of smoke over the bushfire-ravaged Australian island state of #Tasmania on Jan. 28, 2019. The blazes have already burned through nearly 482,000 acres of land, according to the Tasmania Fire Service. More: https://t.co/TkVJ98J5VP pic.twitter.com/v3MCb1oS6F

Vast amounts of rugged wilderness have been charred by blazes that have burned 195,000 hectares, about three per cent of the island state.

A near-century-old trapper’s hut has been destroyed and the popular Tahune Airwalk significantly damaged.

By Christine McGinn and Ethan James in Hobart