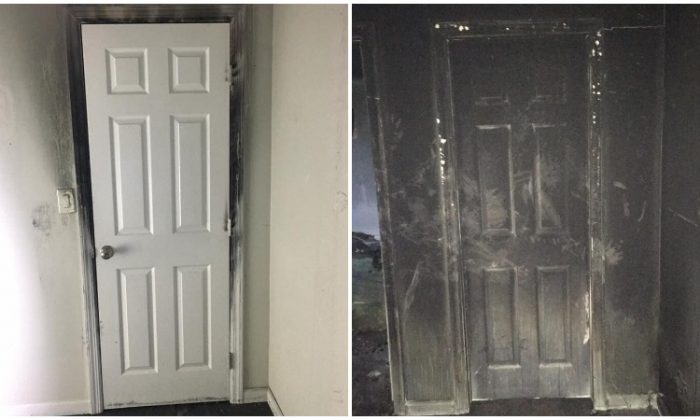 Two pictures of the same door show the difference between life and death in the event of a house fire, according to a U.S. fire department.

The Cold Spring Fire Department in New York posted the pictures on social media, suggesting parents get their kids to shut their bedroom doors at night, stirring up a lot of discussion.

The pictures, posted on Jan. 30, show the same door, from outside in the corridor, and inside the bedroom. Inside, the white door has remained virtually untouched as the surrounding frame has turned black. Outside, the door is black with charring and soot.

“As a parent it’s hard to convince little kids to sleep with the door closed, they always want it open just a little,” wrote the fire department in the post accompanying the pictures.

“I do a lot of fire prevention at schools, so one thing I try and stress to the kids is, how important it is to sleep with the doors closed.”

The photographs are from a house fire in Fairfield, NY.

“The photos below are a great example of the importance of keeping bedroom doors closed while sleeping.”

“The door pictured in both photos is a hollow core door to a bedroom. While the front of the door is severely damaged the closed door protected the bedroom and its contents. If this were an occupied bedroom the closed door could have saved a life.”

The cause of the fire is being investigated, and the homeowners and family dog are all doing well, reported fire department.

Although a few commented that it was impractical to keep kids bedrooms doors closed for other safety reasons, most of the hundreds of comments were thankful to the fire department for raising awareness.

As a parent it’s hard to convince little kids to sleep with the door closed, they always want it open just a little. I…

One person commented.: “Had a kitchen fire a few years ago. It was put out before it spread but whole house was filled with smoke me and my now husband were asleep in our room with our then newborn son. Our room was the only one smoke didn’t get to until my brother in law opened the door to tell us to grab the baby and vacate the house ’til it cleared. I can only imagine if it had spread.”

Despite more modern fire safety equipment, such as sophisticated electronic and smoke alarms, house fires take hold a lot fast these days than they did 40 years ago.

According to researchers Underwriters Laboratories, the escape time for a house fire has dropped from 17 minutes in the 1980s to just three minutes. The reason is the array of modern materials, and the trend towards open-style spaces which remove the inbuilt fire-breaks of older design builds.

According to a September 2018 report by the National Fire Protection Agency, modern approaches and fire safety awareness have had some effect, but overall the number of deaths has changed little over the decades.

“There has been significant success in reducing the number of reported home fires,” states the report. “But once a serious fire starts, deaths are almost as likely to occur in a home fire as they were 40 years ago.”

Including volunteers, there are altogether over 1 million firefighters in the United States, with 345,000 career firefighters documented in 2015.