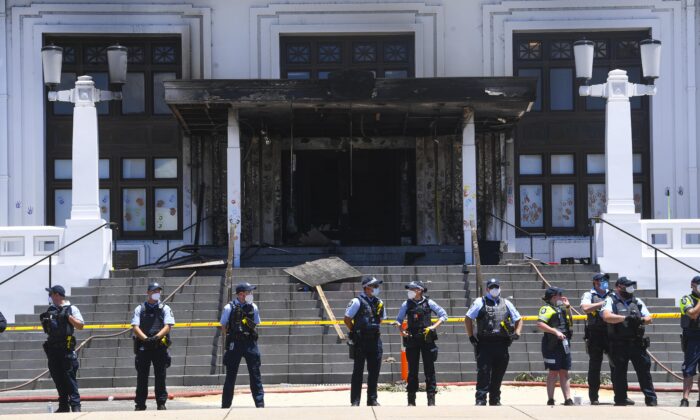 Fire Breaks Out at Australia’s Old Parliament House Amid Protests

A fire has broken out on the steps of Australia’s Old Parliament House in Canberra, forcing staff to evacuate the building.

The incident occurred as protestors carrying Aboriginal flags were gathering outside the building and were heard chanting “let it burn.”

Around 11:45 a.m. on Thursday, emergency services responded to the blaze.

“There’s a lot of police with flags all waving and screaming, a lot of fire trucks,” chef Adrian Richardson told 3AW radio.

“I saw the balcony above the front steps bursting into flames.”

Video footage on social media shows smoke billowing from the front of the building and police cordoning off protestors. It is the second time the building has been set on fire, with the first incident on Dec. 21.

Protestors were also seen engaging in altercations with media personnel.

The blaze has reportedly been extinguished.

Michael McCormack, called the chanting of the protestors “disgraceful.”

“An outrageous attack on our democracy, our history, our sovereignty. This modern penchant for tearing down our past serves no purpose. Repercussions ought to be swift and severe,” he wrote on Twitter.

Old Parliament House is now the home of the Museum of Australian Democracy.