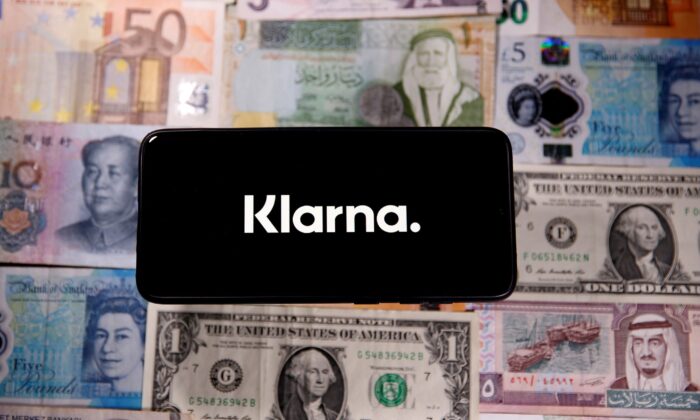 A smartphone displays a Klarna logo on top of banknotes is in this illustration taken on Jan. 6, 2020. (Dado Ruvic/Illustration/Reuters)
Companies

A Swedish fintech company with a novel premise is facing complications as a wave of consumers taking micro-loans to pay for necessities such as rent and groceries threatens the company’s business model.

Klarna Bank AB, the above-mentioned fintech company, has seen a rapid drop in its valuation after a disappointing round of financing drew in only $800 million, as investors become warier of the company’s ability to maintain its unique business model.

Klarna is a company that allows users to take out small, interest-free loans in order to pay short-term bills such as groceries, rent, and gas.

The financial insecurity which causes ordinary Americans to seek these micro-loans may be largely attributable to the swelling rate of inflation, which has continued to rise throughout the period following the initial wave of CCP (Chinse Communist Party) virus lockdowns.

On Wednesday, the U.S. Bureau of Labor Statistics released its latest Consumer Price Index report, attesting to a rate of inflation of 9.1 percent between June 2021 and June 2022—an annual rate of inflation not seen since November 1981. As wages struggle to keep pace with inflation, consumers may find themselves having to tighten their belts to pay for basics such as food and shelter for their families, making Klarna an attractive option for paying the bills in a pinch.

However, these same factors which make Klarna attractive to beleaguered consumers also threaten the foundations of the company’s business model. Klarna notably does not charge interest on the loans it provides, but rather makes its income from charging small fees.

However, the company’s own debts have metastisized as the Federal Reserve’s regimen of interest rate hikes has raised borrowing costs for Klarna itself. At the same time, it is supposed that the growing likelihood of a recession will impair the ability of borrowers to pay back their personal debts to Klarna. The convergence of these factors has made the micro-loan company’s business model seem increasingly unstable and vulnerable under the troubled economy.

These challenges have caused Klarna’s valuation to plummet in the past years, as investors become increasingly skeptical of the company’s ability to weather the storm of inflation and prospective recession. Whereas the company last year was valued at $46 billion, it is now estimated at a fraction of its former value at just $6.7 billion.

“Today Klarna announces an $800m financing round during the worst stock downturn and challenging macro in decades,” said Klarna CEO Sebastion Siemiatkowski on Monday. “We are not immune to public peers being down 75-90% and hence our valuation is down on par… What does not kill you makes you stronger…”

Certainly, Klarna is not alone in suffering under the weight of the current economy: Fintech has been one of the major casualties of the ongoing equity sell-off, with even the massive PayPal falling by over 60 percent since the start of the year. However, the damage to Klarna has been particularly severe, leaving investors questioning whether the company can survive into the future.

Perhaps more pertinently, however, the situation at Klarna reflects the tribulations of everyday consumers, many of whom have been forced to resort to such means in order to sustain themselves in light of the economic woes which have afflicted the nation.

More than anything, the challenges faced by Klarna and similar buy now, pay later fintech companies reflect the growing desperation of American consumers, who increasingly find themselves driven to borrow money just to make ends meet in the current economy.