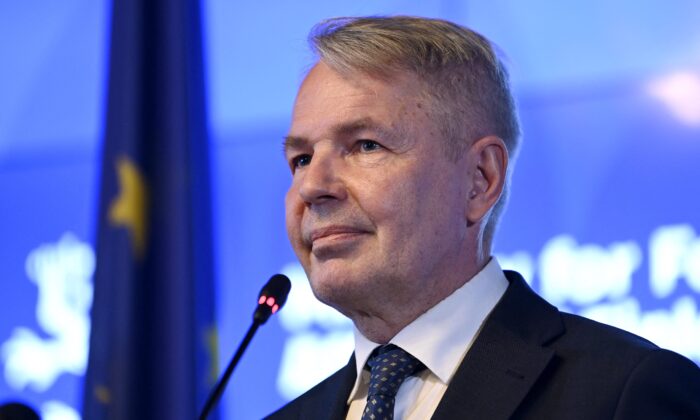 Finnish Foreign Minister Pekka Haavisto addresses a joint press conference with his French counterpart at the House of Estates in Helsinki, Finland, on March 31, 2022. (Emmi Korhonen/Lehtikuva/AFP via Getty Images)
Europe

Finland’s government websites faced cyberattacks amid reports that the Nordic nation is planning to join the NATO alliance, something that Russia has vehemently opposed.

“A denial-of-service attack was launched against the Foreign Ministry’s external website on Friday, April 8, 2022, which began at about noon. The situation has returned to normal at around 1 p.m. The State Department has taken steps to curb the attack, along with service providers and the Cyber ​​Security Center,” Finland’s foreign ministry said in a statement on April 8. Websites of the Defense Ministry and other government services were also affected in the attack.

Just before the attack, Finland announced that a Russian aircraft was “suspected to have violated” its airspace off the coast of the Gulf of Finland near the city of Porvoo on April 8 morning. The suspected violation had lasted around three minutes and the Border Guard eventually initiated a preliminary investigation into the matter.

Both events took place as Ukrainian President Volodymyr Zelenskyy was giving an online speech to Finland’s members of parliament. Finland has not officially blamed the Russian government for the cyberattacks.

The events come as Finland is said to be considering joining NATO. Finland has usually remained neutral on the issue. However, Russia’s attack on Ukraine has forced the country to reconsider its position. Since the Feb. 24 invasion, public polls conducted by Finnish media outlets have shown that a majority of citizens seek to join the alliance.

The parliament will discuss joining NATO “within coming weeks,” Finnish Prime Minister Sanna Marin said on Friday. She expects these discussions to be wrapped before midsummer.

“I think we will have very careful discussions, but we are also not taking any more time than we have to in this process, because the situation is, of course, very severe,” she said.

The possibility of Finland becoming a NATO member has been met with resistance from Moscow. After the Ukraine invasion, Russian foreign ministry spokesperson Maria Zakharova warned during a press conference that both Finland and Sweden must not join NATO as this can have “detrimental consequences” and they might face “military and political consequences.”

Finland has the longest border with Russia among nations in the European Union. It has previously fought two wars against the Soviet Union. In March, Finland’s security service warned that Russia will increase its influence and spying operations against the country. Helsinki is also investigating multiple incidents of airspace violations committed by Russian civil aircraft last month.

Meanwhile, Swedish Prime Minister Magdalena Andersson admitted in an interview with SVT in late March that she is open to a NATO membership for her country, since the Ukraine attack has changed the security situation.