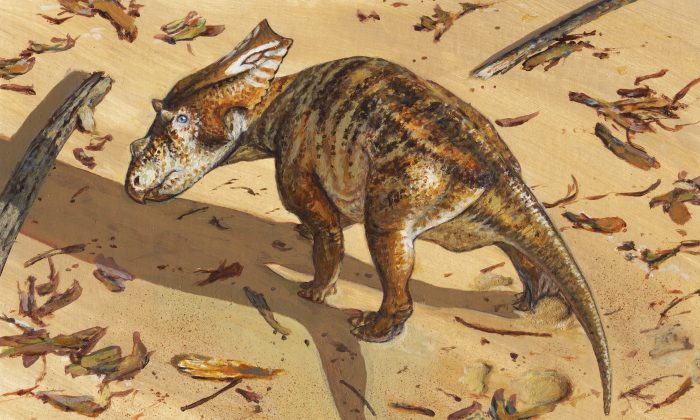 In 2010, scientists discovered the nearly-complete fossil of a juvenile Chasmosaurus in Dinosaur Provincial Park in Alberta, Canada. The Chasmosaurus is a relative of the more famous triceratops.

The analysis of the fossil was finally published this week in the Journal of Vertebrae Paleontology, and will contribute to understanding the developmental process of that family of dinosaurs.

“For the first time ever, we have a complete skeleton of a baby ceratopsid,” Professor Philip Currie of the University of Alberta, who found the fossil, said in a statement. “We’ve only had a few isolated bones before to give us an idea of what these animals should look like as youngsters, but we’ve never had anything to connect all the pieces.”

Near-complete fossils are a rarity in paleontology, and the shape and size of many dinosaur species are inferred from other bones instead of the fully assembled skeleton. In this case, only the front limbs, pectoral girdles, and a terminal vertebrae are missing.

“One of the greatest benefits is that we can now look at the different body proportions for Chasmosaurus as it grew up,” Currie said. “We now have an anchor point with the baby that we can compare with all other specimens of this species, and from that comparison can calculate the dimensions, body weights and ages for all other ceratopsid species. We can start filling in missing pieces.”

The baby Chasmosaurus, nearly 5-feet long, differs from adults not only in size, but also in the shape of the frill on top of its head.

“The back of the frill isn’t broad and squared off the same way that it is in an adult. In fact, the frill narrows towards the back,” Currie said. “It is very different than I expected.”

Scientists aren’t sure what purposes the frills serve, although some have speculated that it served to help ward off predators.