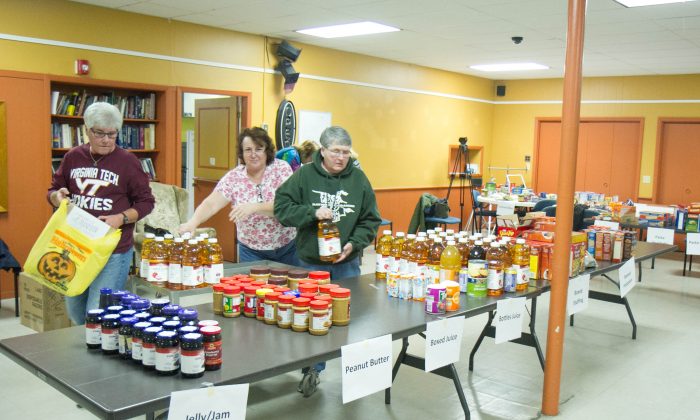 Giving Back With Food During the Holidays

There are many reasons the holidays are busy, whether it is the rush to buy presents, prepare big meals, decorate the house, or traveling to see loved ones. In all the busyness of the holidays though, many people still find time to make the holiday season a little better for others through giving to a good cause, volunteering, or doing both.

That was the case for a group of about 15 volunteers spent over two hours on a Friday night, Nov. 20, preparing holiday food boxes for the less-fortunate at the Otisville Presbyterian Church. At the beginning, the mandate was to fill 54 boxes with canned goods, stuffing, turkey, produce, juice, bread and dry goods to feed a family. Once all the food was added however, it was more like 2-3 boxes per family.

The generous food donation was made possible by the church’s own pantry, the local Girl Scout, Boy Scout and Cub Scout troops, the Minisink Kiwanis and Rotary clubs, the Otisville Lions Club, the Otisville Federal Correction Institution, and the Otisville VFW 5497.

The volunteers worked industriously, bringing boxes of food from the pantry in the basement, organizing them on tables with signs for each category and then, once filled, organizing them with a common number scheme in the hallway for pickup. Just as the last boxes were being put out for pickup, word comes from the local Kiwanis club that 17 more boxes were needed. Without batting an eye, the volunteers set to work preparing the extra boxes with whatever was left. After some confusion about the naming convention the new boxes were filled, labeled, and put in a side room for pickup.

It was a very similar scene at the St. Paul’s Lutheran Church in Middletown on Nov. 23—volunteers bustled around preparing boxes and bags for an anticipated 200 families in the greater Middletown area. Two large rooms with tables lining the walls were all filled with bags and boxes of food, an extra large quantity for the holidays.

Mission director and organizer of the church’s food pantry, Ellie Rivera Velez, said they were preparing three times as much food for the holidays as they normally give away, or 10 meals per person per household. She said they are lucky that the pantry is supported by the Greater Middletown Interfaith Council, but they also get donations from local businesses and individuals.

Many of the volunteers are also members of the community, she said. Some find her through the church and its activities, others are referred there from the courts to do community service, but possibly the most interesting are the volunteers who use the church’s warming center at night and stay during the day to volunteer. “It’s neighbors helping neighbors,” Rivera Velez said, recounting how some volunteers will take food home to neighbors who they know are in need.

So many volunteer that the event has to turn helpers away.

Fr. John Warfel, pastor of Grace Episcopal Church in Middletown, says Thanksgiving is an extension of the soup kitchen meals the church has served for 35 years. The church expects to serve 100 to 125 regulars plus others who come just for the day. He expects more than last year because the soup kitchen count is up from last year.

Warfel feels his congregation and the volunteers support the meal because this is how they “live out the gospel.” So many volunteer that the event has to turn helpers away. He says the day is special for the recipients because it has become a social outlet for many. The $150,000 needed to operate the soup kitchen is funded by the Episcopal church, grants, and individual donors.

The Port Jervis Salvation Army served Thanksgiving dinner on Nov. 24 with all the trimmings, said Sharon Eagle, the social ministries director, under direction of Port Jervis Salvation Army Lt Jonathan and Kelly Ross. The meal was extended so Eagle expected more than the 50 to 60 who came last year. She has been doing this for 18 years—”I get enjoyment just pleasing people.”

The Thanksgiving food baskets give hope and encourage people to help.

She said the event was promoted on the radio and by word of mouth among the homeless in the area. Each year volunteers from the Delaware Valley Junior Club, advisory board members, and other volunteers come to serve the family style dinner.

Peter Rustico, pastor of St. John’s Lutheran Church and president of the interfaith council, coordinates with other religious organizations on Thanksgiving. He says it’s his Christian duty to serve and putting together Thanksgiving baskets pulls the community together. “I look at what unites, not what divides us.”

Nancy Miller coordinates the food drive at Our Lady of Mt. Carmel Parish and says they gave out 102 food baskets on Nov. 24, about the same as last year. For those who volunteer and donate, Miller says helping out has its own reward. It is “doing the work that God calls us to do” by helping those less fortunate and sharing one’s resources. She says it gives hope and encourages people to help.