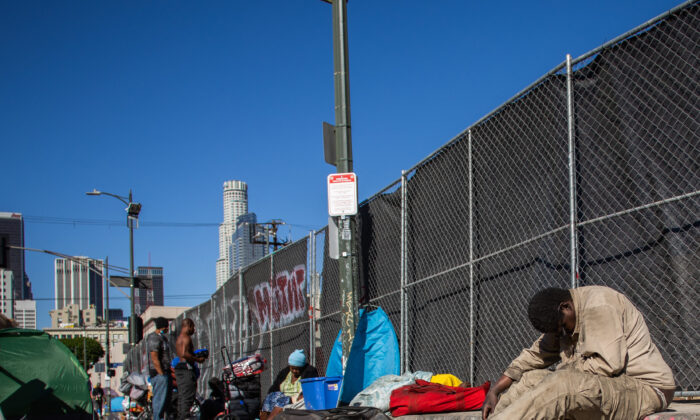 Homeless people sit on the sidewalk by the nonprofit Midnight Mission's headquarters, in the Skid Row neighborhood of downtown Los Angeles on Nov. 25, 2021. (APU GOMES/AFP via Getty Images)
US

What Life Is Really Like on Los Angeles’s Skid Row

Rats and poverty for some, but for others, flat-screen TVs, air conditioning, and a stocked fridge
By Allan Stein

LOS ANGELES—The homeless tent city known as Skid Row in downtown Los Angeles is where people end up when the bottom drops out of their lives.

Sometimes, it’s where they die—one final insult added to injury.

For Cuban-born Fernando Sanchez, Skid Row has been his home for a decade and a half.

He didn’t plan it that way. Life’s uppercuts just came after losing his job in the Great Recession.

When his family gave up on him, he realized he’d lost everything except his will to live.

“To be honest, I’ve been homeless for the last 15 years,” Sanchez told The Epoch Times.

“I lost my job, [had] problems with my family. You know how a family is sometimes. When you have no job, they think you [are lazy]. No support. I used to have a good job. I used to be a truck driver.”

At 64, Sanchez is close to retirement age.

He admits life on Skid Row could be much worse if it weren’t for the kindness of strangers. Each day he sees them bringing food, clothing, and other essentials.

“How do I survive? They donate food—breakfast in the morning. Over here, they give a lot of food,” Sanchez said, pointing at the sidewalk area where the supplies get dropped off.

“I don’t get anything from the government. I’ve never been in the military—nothing like that,” he said.

Through networking and charity, Sanchez has been lucky to accumulate the things he needs to make life in this urban wasteland bearable—even comfortable.

Pitched against a concrete wall is the main tent where he sleeps. It has a large flat-screen television, an air conditioner to stay cool in the summer, and a gas generator to power both.

He has a full-size bed made with fresh linen and a pink throw rug he keeps clean with an electric vacuum.

In an adjoining tent, he has a small refrigerator, a deep freezer stocked with beef and chicken, and a wine rack with bottles of merlot and other vintages.

He recently acquired a kitten and a puppy to keep him company. He has a BMX-style bicycle to get around and trusted friends to watch over his property when he’s out and about.

Yes, life could be worse but for a bit of ingenuity and the goodness of strangers.

On this sunny morning, a young woman stopped in front of Sanchez’s tent, pulling a cart filled with brand-new shoes and T-shirts.

She asked Sanchez which ones he wanted.

Sanchez wasn’t too fussy. He picked the best red T-shirt that fit him.

Over the years, religious and other charitable groups have formed missions to help the homeless of Skid Row, like Sanchez, who now number more than 11,000.

Drive-By Do-Gooders, for example, is a volunteer organization serving 240 poor adults each week, mainly those on Skid Row who have difficulty reaching services.

Charitable donations take place from a car window, “much like an ice-cream truck,” according to the organization’s website.

“We offer basic human needs with no agenda, just pure giving,” it states.

Among the most vital necessities they provide is drinking water, handing out nearly 1,000 bottles every month, as well as sanitary wipes, socks, tarps, clothing, and “portable protein” foods such as cold string cheese.

Food lines and pop-up buffets are in the heart of Skid Row. Drive-By Do-Gooders travel to the outskirts of the area, where hundreds of the disabled, elderly, and mentally challenged reside.

The city has launched programs, such as Homeless Health Care Los Angeles, to mitigate the suffering of the poor and disadvantaged living on Skid Row.

Evans Clark is the project manager of the ReFresh Spot on Towne Avenue, located directly across from Sanchez’s tent enclosure.

The facility offers amenities most people might take for granted: toilets, showers, a safe, clean, shady place to hang out, and a laundry facility.

“They’re doing pretty good. I don’t hear any complaints,” Clark told The Epoch Times. “We treat everyone with respect and dignity, let them know they can come back any time and get the services we provide.”

At the corner of Town Avenue and Fifth Street, a station wagon pulled up next to the curb cut where a man who goes by the name Soul Brother sat in a chair.

The driver then held out a shopping bag filled with groceries.

Soul Brother walked over to the driver, receiving the donation of perishable food with a heartfelt thank you.

You could say Soul Brother is the gatekeeper of this dilapidated stretch of Skid Row, wary of newcomers who might wish to steal or exploit the homeless in some way—as they have.

There have been murders on Skid Row over the years, as its history is as long as it is tragic.

Between 1900 and 1920, it was known as Hobo Corner, hosting thousands of migrant workers and men left homeless after the Civil War.

In time, the police grew tired of the violence, mental illness, and alcoholism that plagued the location. Some men didn’t want to leave, so the police forced them out with periodic “hobo sweeps” to reduce their numbers.

“Don’t help this class,” the local press reported. “It’s a crime against the community to do it.”

Today, Skid Row spans nearly five square miles—50 city blocks. It continues to grow in a worsening California economy with new arrivals each day, including people with myriad problems and people priced out of the market.

Despite the daily misery and squalor, Soul Brother does his part to keep his tent enclosure clean and free of garbage that might attract rats.

Rated one of the most rat-infested cities in the United States, Los Angeles now faces periodic outbreaks of flea-borne typhus, according to the Los Angeles County Department of Public Health.

As of November 2021, the county reported 83 cases of typhus, the Los Angeles Medical Association said.

“One of the first things they should have tackled was the rat situation,” Soul Brother said. “If you don’t clean the streets right, the rats will come back.”

While good samaritans have pitched in with donations of trash cans, those only get hauled away when filled, Soul Brother said.

“You’re telling me that the richest country with the richest city in the world has this type of problem? [Sanitation] should be on the top of the list. We need more trash cans. How will one trash can take care of all these people right here?” he said.

Sanchez said that although a cleaning company makes regular visits to Skid Row, “everywhere they got a lot of rats.”

“Rats, roaches—everything. I can prove it to you. Wanna see?”

Sanchez points to deep holes in the sidewalk.

“Everywhere, you see? They come from these holes over here—day and night. Oh man, they’re big. Don’t let them fool you. We have rats all over.”

A man who calls himself “D,” who lives in a tent at the corner of Fifth and Towne, said he’s been homeless on Skid Row for the past seven years after being released from prison.

It’s been an uphill battle on the streets for him ever since.

“I know many people who have signed up [for assistance] and got help. In my case, I’ve been locked up for too long.”

“COVID also hit a lot of people” on Skid Row, he said.

The Los Angeles County health department reported more than 3.4 million COVID-19 cases throughout the county as of August.

In January 2021, Rev. Andy Bales, president and CEO of the Union Rescue Mission on Skid Row, told Fox 11 there had been a 66 percent surge in cases among the homeless.

“I knew a couple of people—one in particular,” he said. “Her van was so packed full of stuff she couldn’t drive around.

“Yeah, she was out here. She was a good person. She was funny. Last I heard, she went out to Santa Monica or was on her way there.”

D said he also met a woman with three young girls who visited the ReFresh Spot every day.

“I’m not exactly sure what her story was, but she was divorced or something like that. There are a lot of people out here for a lot of different reasons. Some have mental health issues—some more severe than others.

“Some are having a harder time adjusting or reintegrating [into society]. I find out about some, and when I check up on them, it’s too late.”

Then there are those on Skid Row who choose to stay homeless, fearing being “pigeon-holed or, put in a way, restricted,” D said.

“They’ll give you a room, and it sounds great, but you can’t have visitors. So for a single guy that’s kind of like—you know what I mean.”

“With me, I’ve got anxiety. I’ve got PTSD. I can’t get into a subway without freezing up. I’ll have like standing blackouts.”

Mario Fase, 54, also known as “Guitar Man,” said he joined the ranks of the homeless on Skid Row when he became divorced.

That was 10 years ago. He’s been on a waiting list for subsidized housing for months.

Like Sanchez, Fase lived in Florida before moving to California, hoping to create a better life for himself.

“I liked California because I was in the Navy for three years—San Diego. [But] they use you, and they forget about you. I feel resentment. They don’t care. It’s not right. [But] that’s another story,” he said.

Fase said he’s used to many unpleasant things on Skid Row—the deafening fire alarms blaring nonstop and the rats coming out all day.

“All sizes. The bigger they are, the faster they are,” he said. “They’re not aggressive. … OK—enough, get out of here. They’re everywhere, man.

Ben Burgey counts himself fortunate on Skid Row, having lined up a small apartment.

“After being on Skid Row for seven years, I’ve had some rats in my apartment—rats all the time,” he said.

“Do you see those tent rods? When you use them like a club—it’s like—’smack!’ It’s very humane. I got good at it for a reason. I’ve had lots of rats for practice.”

“I mean, the fleas from rats pass bubonic plague—25 million people [dead],” he said. “We’ve had this education before.

“Is it getting out of control? It’s been out of control. If these rats move slowly, they’d be furniture, but [they] move quickly.”

Soul Brother said the problem could improve with a few more trash cans.

But for the kindness of strangers.

Correction: This article has been updated to correctly name ReFresh Spot. The Epoch Times regrets the error.