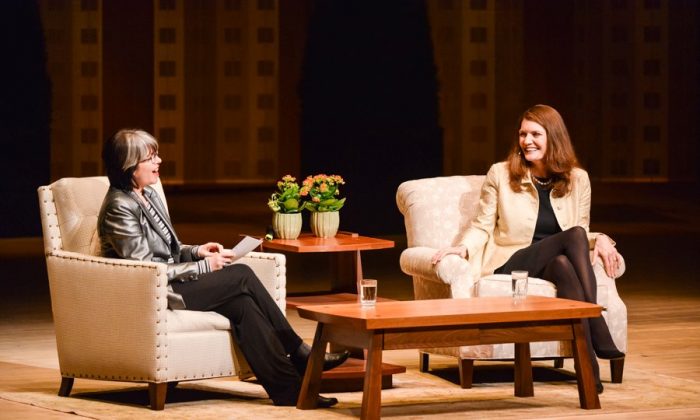 Best-selling author Jeannette Walls (R) and host and moderator Laurie Brown at Walls's appearance in Toronto on March 18. Walls will be back on stage to tell her story in Vancouver on April 16 at The Centre in Vancouver For Performing Arts. (Doug Sturgeon – Eclipse Photography)
Entertainment

Author Jeannette Walls to speak in Vancouver
By Madalina Hubert

Jeannette Walls was a successful gossip columnist in New York City, rubbing elbows with celebrities and enjoying newfound fame. Then one day while in a cab on her way to a celebrity party, her eyes fell on a woman sifting through the garbage. Shocked, she realized it was her mother.

Walls admits that to her shame, she sank low in her seat and asked the driver to take her home. The fear that someone would discover that her parents were homeless, and learn about her difficult childhood was overwhelming, and she could see her successful career falling apart in front of her eyes.

Yet soon after this incident, Walls knew she would have to confront her past and make peace with her parents. It was thus that she sat down to write what would become the best-selling memoir “The Glass Castle.”

The New York Times best-seller sold over 3.5 million copies in the U.S., was translated into 22 languages, and will be adapted into a movie starring Jennifer Lawrence (“The Hunger Games”).

The story Walls thought would bring shame and an end to her career not only brought her tremendous success but allowed her to make peace with her past and inspire millions of people.

The memoir tells of Walls’s childhood growing up in West Virginia, where she and her three siblings often experienced hunger, cold, and many other hardships at the hands of financially irresponsible parents. Yet while they often ignored their children’s basic needs, the parents also inspired them with confidence in their own abilities, creativity, and the courage to dream and confront their fears.

In the gruelling process of writing her book, Walls often felt discouraged, yet she kept going in hopes that her memoir would inspire others. Her wish was to have a rich child learn to sympathize with a poor child, and at the same time to bring hope to a poor child.

Walls’s hopes were fulfilled beyond her expectations. Her honest rendering of personal hardship not only inspired many, but led many readers to approach her to share their own stories of shame and tough times—experiences that the author now treasures.

Walls learned to discover the gifts in hardship and make the best of her life while helping others in the process. Her story is one of the heart, and certainly worth reading and hearing.

Jeannette Walls will tell her story in Vancouver on April 16 at The Centre in Vancouver For Performing Arts as part of the Unique Lives and Experience series.