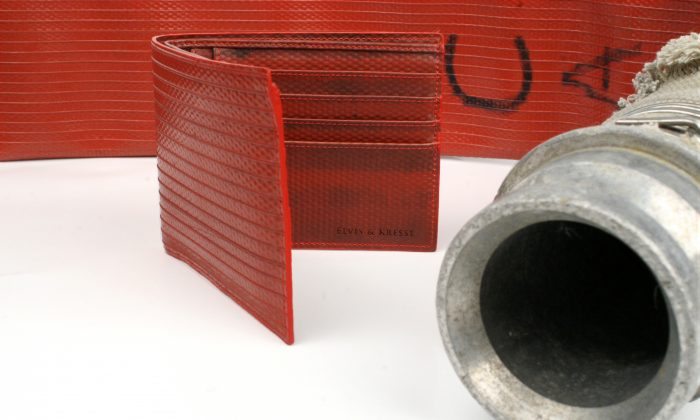 A wallet by Elvis & Kresse made out of reclaimed fire hose that would have otherwise been destined for landfill. Elvis & Kresse donates 50 percent of its profit to the Fire Fighters Charity. (Elvis & Kresse)
Fashion

LONDON—Not everyone can dream up of turning a sturdy fire hose into a fashion item; but, not everyone shares the same imagination and passion for reusing waste as Canadian-born Kresse Wesling and her British partner James ‘Elvis’ Henrit.

It all started when Wesling was drawn to some fire hose waste coiled on the rooftop of Croydon Fire station in South London.

She had just attended a lecture about environmental management, where she had met a member of the the London Fire Brigade.

Wesling found it inconceivable when she found out that Greater London produced 10 tonnes of decommissioned fire hose that ended up in landfill every year; before long she was at Croydon Fire Station to take a look at it herself.

“They are so beautiful just as they are,” Wesling said passionately about the fire hose. “The color, how strong they are, how durable they are, the life they had, some of them are 30 years old.”

And she soon had some fire hose over her shoulder and was enthusiastic to put it to some use.

Despite the initial enthusiasm, it took Wesling and Henrit a couple of years to come up with the right way to reuse the seemingly useless material.

They started experimenting by making roof tiles, but found there wasn’t enough fire hose waste to make a sustainable business.

One day, Henrit used a piece of fire hose to repair his broken belt, and the couple realized that belts seemed to be a perfect product for them to make with fire hose. Not long after, Wesling had agreed to create 1,000 belts for the London Live Earth Concert held in 2007 to highlight climate change.

“I didn’t always think I would be doing fashion with it, actually I had no idea,” she recalled. “We only wanted to do something where we could rescue all of the hose.”

The couple have since expanded their business, named Elvis & Kresse, to include upcycled products such as bijou bags, cufflinks, and iPad cases made out of fire hose. By 2010, all the unwanted fire hose from London was being re-purposed by Elvis & Kresse.

Last year Elvis & Kresse made around £100,000 (US$160,000) gross profit across their whole business, which has a focus on reusing waste, including fire hose waste. Their fire hose range made around £10,000, of which 50 percent went to the Fire Fighters Charity. The business was started with an investment of just £40.

The couple have also expanded their material use to 15 types of waste material to include items such as decommissioned parachutes, used to line some of the bags and wallets.

“Our role in the world is to rescue these great materials,” said Wesling, who has always had a passion for waste recovery.

Elvis & Kresse’s upcyled products break the notion of recycling for austerity, and their values have been likened to the traditional Japanese technique kintsugi.

Kintsugi literally translates as golden joinery, where broken pieces of ceramic are melded back together using golden lacquer. This means that the fixed ceramics becomes more valuable than the originals.

Similarly, the disused fire hose, just four inches wide, is arduously scrubbed and prepared. The pieces are stitched together to create “new” items of luxury.

To date, Elvis & Kresse has diverted 300 tonnes of waste from landfill and has transformed the waste into useful products.

Yet Wesling stresses they have just started. England produces 177 million tonnes of waste every year, and a significant portion of that goes into landfill.

Wesling continues to be on the lookout for positive solutions to waste issues.

The couple have recently launched another initiative, called Design for Deconstruction, to re-use leather waste.

The leather home accessories are made up of interlocking off-cuts from an array of leather manufacturers, including an iconic British fashion house and a luxury car manufacturer. The lego-like design means pieces of leather can be styled into a rug, coasters, cushions, and many more products.

They were first alerted to the issue of leather waste when they were contacted by a saddle maker, who asked them for advice on what he could do with his leftover leather scraps.

Half of the profits from the leather range will be donated to charity. The charity is yet to be decided, but will be announced and given a check in one year’s time.

“We look at materials that no one has a plan for and create a solution,” says Wesling, “problems are so inspiring.”