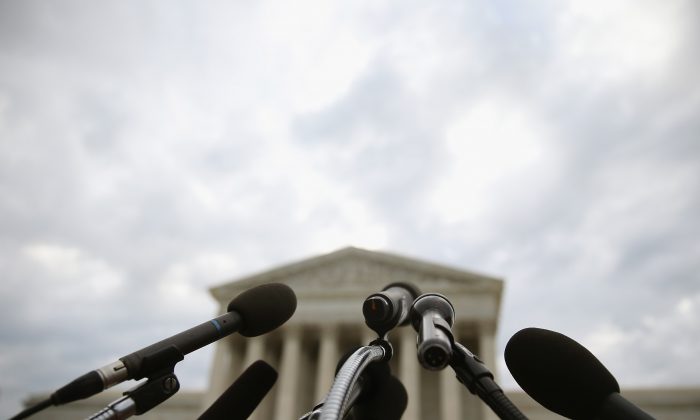 Microphones are set up in front of the U.S. Supreme Court, June 30, 2014 in Washington, D.C. (Mark Wilson/Getty Images)
News

Bipartisan Support: Find the Garlic and the Parmesan

Yesterday I dined with a respected, trusted colleague, who is my political antithesis. Even our meals gave clues to our likely ideology.

Can you discern party affiliation through the language of pasta? If you have lived in America long enough, you probably can.

At the build your own pasta bar, one chose tomato sauce, chicken, and onions, and the other chose pesto, eggplant, asparagus, and olives.

Garlic was an area of bipartisan agreement. We support garlic. Doubtless, garlic supports us back, and would work hard for us if we sent it to Congress. We also achieved consensus regarding Parmesan.

I’m going to play a game here and try not to reveal who is what. One of the great television anchors from the old, golden, pre-cable, non-vulgar age went his whole life without telling anyone how he voted—including his wife.

His reason, I read, was that he took the ethos of being an unbiased journalist that seriously.

So we are talking about upcoming stories to plan for, the Senate, the Affordable Care Act, immigration, Ferguson, solar power, storms, disasters, and Respected Colleague asks me a question.

Do I read the blogs from the other side? And yes, I do, but here is the thing. I read them with a bad attitude. And I demonstrated it to RC: “Ewww, I said, ewwww. I do read them. I read everything. But, ewwww.”

This is not what the secret-voter anchorman would have said. After looking within, I thought I would try to remove any disdain I have for the loyal opposition in America because, after all, that is what both sides are. Even knuckle draggers and demagogues may be trying to do what they think is right for the nation. Even latte-sipping fellow travelers might be the same way.

My book club is a microcosm of the political self-segregation in the country. We were trying to discuss “Ordinary Grace” without spoiling it for the slacker who had not finished it (me).

Wine had been flowing.

One of our most lively members blurted that she used to vote the other way—because her husband told her how to vote.

You never saw such a pile-on! Scorn and opprobrium rained upon her well-coiffed head. Good manners quickly reasserted themselves, but for a second the abyss yawned under our sensible shoes.

At least I can do my own part to close the abyss. It’s not the New Year, but I have made an early resolution. I’m going to try to calmly understand the other side.