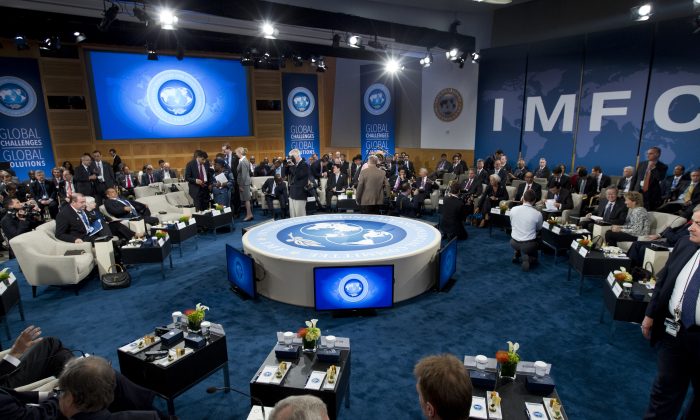 WASHINGTON—World financial leaders on Saturday promised “bold and ambitious” action to boost a global recovery that has shown recent disturbing signs of weakness.

That pledge from the International Monetary Fund’s policy-setting committee comes after a week of stomach-churning swings in the financial markets triggered by growing fears that parts of Europe could be in danger of slipping into another recession.

The 188-nation IMF called increasing economic growth an “utmost priority” and pledged to make the necessary structural changes that would stimulate greater growth.

But finance leaders have made similar promises in the past, only to fall short when trying to follow through.

The commitments came in a closing statement from the IMF’s steering committee at the fall meeting of the IMF and World Bank.

Managing Director Christine Lagarde said at a news conference that the IMF has made $130 million available to Guinea, Liberia and Sierra Leone, and that the IMF and other international agencies stood ready to do more.

“If more is needed, it will be there,” Lagarde said.

The IMF and World Bank meetings were preceded by talks among finance ministers and central bank presidents of the Group of 20 nations, which comprise 85 percent of the global economy. Those discussions focused on the recent growth slowdown and troubling signs that some countries in Europe could be close to another recession.

In a comment clearly aimed at Germany, Treasury Secretary Jacob Lew told finance ministers that European countries with “external surpluses and fiscal flexibility” needed to do more to address weakness in demand that was holding back growth.

He also called on China, now the world’s second largest economy, and Japan, No. 3, to make the necessary policy adjustments to increase their own growth.

A string of weak reports on economic activity in Germany, the largest economy in Europe, jolted financial markets this past week.

U.S. stocks ended their worst week since May 2012, and the market turbulence served as a backdrop for the finance meetings.