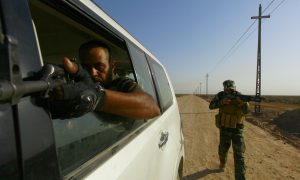 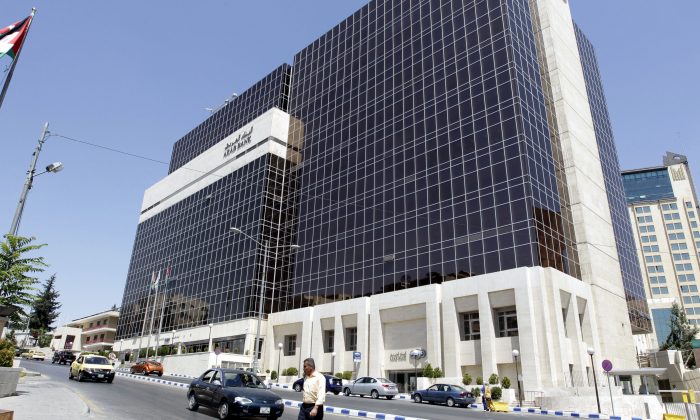 The Arab Bank's main offices in the Jordanian capital, Amman, on August 16. (KHALIL MAZRAAWI/AFP/Getty Images)
US

For Israeli attorney Nitsana Darshan-Leitner, the key to breaking the back of terrorism networks is to go after funding used for weapons, support, and different types of operational expenses. Darshan-Leitner is founder and director of the Israel Law Center, which litigates against terrorist organizations and banks that support terrorism.

Those represented by her group use the Anti-Terrorism Act, which allows victims of U.S.-designated terrorist organizations to file suit against financial institutions, even if the case happened outside of U.S. The goal is to seek financial compensation.

“Terrorism is a scary reality everywhere,” she said, and added that her group currently has about 40 Anti-Terrorism Act cases in process. “People understand that terrorism is something you must fight against, otherwise it will spread and take over.”

Her group of six attorneys files cases in the U.S. with co-counsels based there who share their idealism. The cases are complex and don’t come with a guaranteed win, or compensation. But Darshan-Leitner believes that the nature of terrorism means that it a threat to our very existence.

“It became a global threat, a threat to Western society, and the most clear picture is what’s going on now with ISIS.”

The act saw a major victory last week when a Brooklyn jury ruled that the large Jordan-based Arab Bank should be held liable for a wave of Hamas-sanctioned suicide bombings in the early 2000s. The attacks left several Americans dead or wounded. The civil suit, filed in 2004, marked the first time a bank faced a trial under the law.

Hamas was declared a terrorist group by the U.S. State Department in 1997, and became fair game in court for victims, such as those who survived suicide bombings. Nearly 300 people joined the case as plaintiffs.

In more than a month of testimony, the jury heard Hamas experts and other plaintiff witnesses attempt to link extremists to Arab Bank accounts and detail how cash payments were funneled through the bank and into the hands of the families of suicide bombers. Though it was the first case of its kind back in the early 2000s, it’s certainly not a lone example today.

For Darshan-Leitner, hitting terrorists and terrorists organizations where it hurts, in the pocketbook, is also a powerful recipe for legal intimidation. In the case of Arab Bank, they have at least $26.1 billion in consolidated assets. An attorney for the bank, Shand Stephens, said last week that he was confident that the verdict will be overturned on appeal based on “errors in admission of evidence, errors in jury instructions and errors in imposing sanctions.”

Whether the jury’s decision is overturned or not, the win reportedly has sent shudders through the financial world. While some institutions are nervous about their own dealings, Stephens argued during the trial that it is nearly impossible for a financial institution to catch every alleged terrorist act of financial support. He said that the names of Hamas operatives who did business weren’t on terrorist watch lists compiled by the United States and other Western nations.

The plaintiffs “are asking you to make your own list” based on the word of their experts, Stephens said.

But Darshan-Leitner isn’t slowing down, despite such denials of culpability. To date, her group has won more than $1 billion in judgments and collected more than $120 million for plaintiffs. In one case still pending against the Bank of China, accounts at the bank in New York were for Palestinians living in Guangzhou, China. They were allegedly receiving $100,000 at a time from Hamas headquarters in Syria, which was then being sent to family members in Gaza.

A deceased victim of weapons allegedly bought with that money was Avraham Moses, one of eight people shot by a Palestinian at a Jewish religious school in Jerusalem in 2008. Avraham’s father, Naftali Moses, is an American citizen and a plaintiff in the case against the Bank of China.

“It turned out that the [Israeli] government has warned China that the money they spend ends up in terrorist organizations,” said Moses. “It is against Israeli law, against international law, and against American law.”

Though a key Israeli government witness in the case, Uzi Shaya, has been prevented from testifying, the case will likely still go forward. On Sept. 30, former majority leader in the U.S. House of Representatives Eric Cantor was deposed over conversations with Shaya about the case.

Whatever the outcome, for Moses the overarching principle is that terrorism—no matter where it happens—is somehow funded.

Epoch Times reporter Ben Kaminsky and The Associated Press contributed to this report.