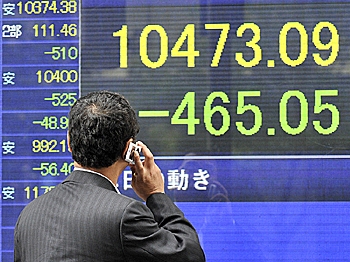 The Congressional Budget Office (CBO) estimates that in the past 15 months, U.S. retirement plans lost as much as $2 trillion.

“Unlike Wall Street executives, American families don’t have a golden parachute to fall
back on,” Rep. George Miller (D-Calif.), Chairman of the House Education & Labor Committee, said in his opening remarks during a congressional hearing Tuesday on the impact of the financial crisis on workers’ retirement security.

The Wall Street financial crisis has already claimed major institutions such as Lehman Brothers, Washington Mutual, Wachovia, and Bear Stearns. Some, such as Merrill Lynch, were bought by larger companies for a discount. And most companies have seen their stock tumble to new lows.

Many retirement funds skew toward stocks, which were hit hardest in the recent financial crisis. The S&P 500 Index lost more than 31 percent this year, while the Dow Jones Industrial Average lost around 29 percent since Jan. 1.

The state of our economy has overtaken foreign policy as the number 1 issue in the 2008 Presidential Election, and for good reason. Many Americans are worried about their savings and investments amidst current market conditions.

A newly released report by the AARP paints a bleak picture of Americans’ financial security. The study reports that 13 percent of Americans 45 and older are tapping into their retirement savings accounts to cover day-to-day expenses.

It also found that 20 percent have stopped contributing to retirement accounts altogether during the past 12 months, which further jeopardizes their long-term financial security. For millions, saving for retirement at work is not an option at all, according to the AARP study.

“A new poll just found that 63 percent of Americans are worried that they will not have enough savings for their retirement,” Rep. Miller said. “Tragically, they may very well be right. Due to the collapse of the housing market and the financial crisis, trillions of dollars that Americans were counting on has been lost.”

Unlike pension plans, the risk of loss falls directly on the worker in 401(k) plans.

But Jerry Bramlett, CEO of BenefitStreet Inc., advises against sudden and irrational shift in investment strategies.

“Let me emphasize, exchanging the equity investments in your retirement account for Treasury bills is not a sound long-term investment strategy and will subject retirees to substantial inflation risk,” Bramlett said in a written statement.

Bramlett says that unless an investor is close to retirement, abandoning positions that are already deflated may not be a wise decision.

“Given that most 401(k) participants are not investment experts, there is a danger that many of them will over react to this market downturn—I want to caution against this,” he warns.