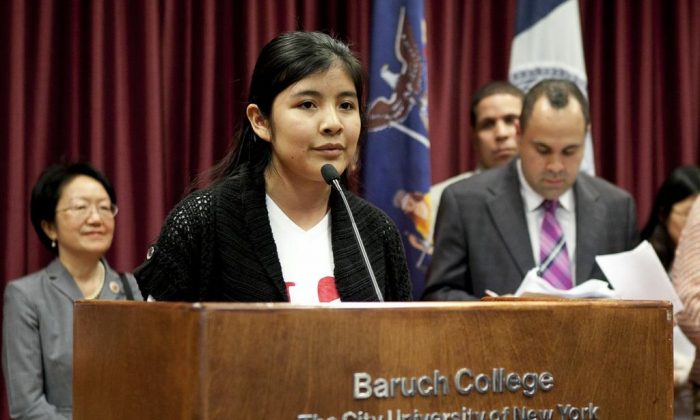 Financial Aid for Immigrants Held Up in Albany

NEW YORK—Kassandra Guzman is about to graduate from Flushing High School. She has lived in the United States for 13 years with her parents, three brothers, and a sister. She is an undocumented immigrant.

Kassandra recently learned that she was accepted to the Borough of Manhattan Community College (BMCC.) Without legal immigration status, BMCC could charge Kassandra over $5,000 per semester as an international student. By comparison, legal state residents pay only $2,000.

This may change if a piece of state legislation called the NYS DREAM Act makes it to the state Senate floor before the session expires on June 20. But state Sen. Dean G. Skelos, a Republican, and state Sen. Jeffrey D. Klein, a Democrat, both oppose certain portions of the bill and hold the power to bring it to the Senate floor or stall it in committee.

The bill, called The New York State Development Relief and Education for Alien Minors (NYS DREAM) Act would open the door to documented and undocumented immigrants in New York state who meet certain criteria to apply for state financial aid and scholarships. The bill would also create a DREAM Fund that will administer private money in scholarships to immigrants and allow immigrants to open a New York State 529 College Savings Account.

“From what I heard there were issues that the federal government overruled and that’s why there were many concerns on the Senate side,” said state Sen. Jose Peralta, the sponsor of the bill in the state Senate, regarding its previous versions. “The bill that I have eliminates all those federal red flags.”

As of May 30, there are 12 legislative sessions left before the state Senate goes on an annual six-month recess. According to Peralta, the bill’s future depends on whether it makes it to the floor for a vote. The decision rests with Skelos and Klein.

“That’s all we’re asking for, just bring it to the floor,” said Peralta. “We know that there is enough votes for this pass.”

Klein supports the bill, but believes it should be postponed until funding from state casinos or other sources becomes available, according to a spokesperson from his office.

“Since the current bill has not yet gained support from a majority of senators, Senator Klein is working with his colleagues and the advocates to craft a bill that can make it through the chamber and on to the governor’s desk,” a representative from Klein’s office wrote in an email to The Epoch Times.

Skelos supports only the DREAM Fund portion of the bill that would be funded with private money, but opposes the portion of it that would dole out public money to immigrants, the Daily News reported.

“Both Senator Klein and Senator Skelos need to find courage to bring this important bill to the floor for it to pass. When in Washington, D.C., Republicans, conservatives, Democrats, and liberals alike are coming together in support of not only immigration reform but in support of the DREAM Act, it is once again going to show that the Republican Party in New York State is once again lagging behind its counterpart in the nation,” said Moya.

According to Peralta most Democrats would vote for the bill, and he expects that a few Republicans will be on board as well.

Kassandra will be the first in her family to attend college. She worked as a cashier while she was in high school to support her family, but the business she worked for closed down. She said it has been difficult to find a job since the economy took a downturn. Facing expensive tuition with no right to financial aid presents a hardship.

“It’s unfair because I’ve been living here my whole life, and I don’t see my life outside of New York,” said Kassandra.

Her friends who were born in the United States have seen her difficulties: while they played basketball and went to parties, she went to work to save for college. Kassandra’s mother works as a cleaning lady and her father works in a deli.

Approximately 65,000 undocumented immigrants graduate from U.S. high schools each year, according to a press release from the New York State Dream Coalition.

“But because only of the barriers they face accessing high education, only 5-10% of these undocumented high school graduates go to college,” the press release states.

The bill’s proponents argue that it may be a waste of money to pay for immigrants’ education in middle and high schools and to give up on them at a crucial point before they enter college.

The office of New York State Comptroller (OSC) Thomas DiNapoli estimates that the cost of financial aid to immigrants would be $20 million if the reforms were in effect this year. Nearly 95 percent of the state’s aid to students is provided through the Tuition Assistance Program (TAP). More than $920 million in financial aid in the 2011–2012 academic year was administered through TAP. Since some part-time immigrant students will be able to become full-time with the aid from TAP, the costs could increase by another $5 million, the OSC report states.

The returns, DiNapoli’s report points out, outweigh the investment. The OSC estimates that a person with an associate’s degree would pay more than $35,000 in additional state taxes over his or her working lifetime. TAP provides a maximum $8,000 award for a two-year degree. A person with a bachelor’s degree would pay an estimated $60,000 in additional taxes over his or her working lifetime, compared to a maximum $20,000 TAP award for a four-year degree, the OSC report estimates.

The NYS DREAM Act is different from its federal namesake: the national DREAM legislation. The national bill is focused on immigration policy. While the national legislation has stalled, several states have passed state-level solutions. Texas, New Mexico, and California have passed legislation that would allow undocumented immigrants to apply for public financial aid for college.

People who oppose the bill say that there isn’t enough money to fund scholarships for legal citizens, much less illegal immigrants. Proponents of the bill argue that the NYS DREAM Act is an investment rather than a giveaway since the state will benefit from the increased tax revenues.