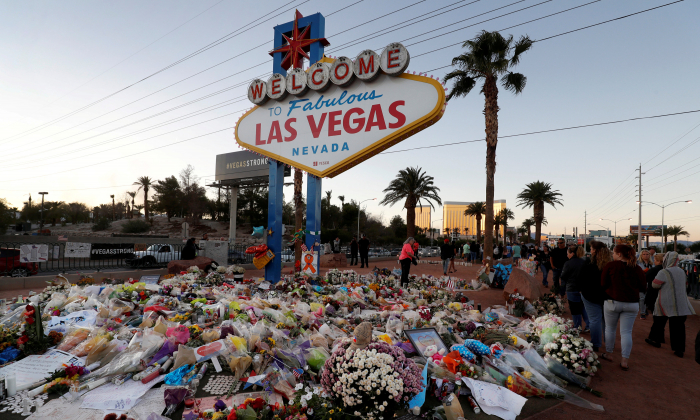 The "Welcome to Las Vegas" sign is surrounded by flowers and items, left after the October 1 mass shooting, in Las Vegas, Nev., on Oct. 9, 2017. (Las Vegas Sun/Steve Marcus)
Crime and Incidents

LAS VEGAS—Police in Las Vegas said Jan. 3 they have finished releasing audio, video and written records about the deadliest mass shooting in modern U.S. history 15 months ago during an open-air concert.

The department said that after 34 releases of material since May, officials believe they have complied with a court order in a public records lawsuit about the Oct. 1, 2017, shooting. Plaintiffs included The Associated Press.

“We don’t expect any further major releases of either video or documents,” the department said in a statement. “If documents are identified that have not previously been released, they will be made available.”

Fifty-eight people died, 869 were wounded or injured, and thousands were affected when a high-limit video poker player fired assault-style weapons equipped with rapid-fire devices from the Mandalay Bay resort into a crowd of 22,000 concertgoers across Las Vegas Boulevard.

The material released until last week provided dramatic details about horror and heroism, but no insight about the motive of 64-year-old gunman Stephen Paddock.

Authorities have said Paddock killed himself before police arrived. Investigators believe he acted alone with no broader conspiracy and no link to terrorism.

Transcribed statements from 18 of the hundreds of officers who responded to the shooting were made public last week.

The material came with little department comment or explanation and no narrative thread.

Clark County Sheriff Joe Lombardo released an investigation summary and declared the police investigation ended in August, saying frenzied reports of other shootings on the night of the massacre turned out to be false.

The FBI is expected to soon release a report including a behavioral analysis of Paddock.