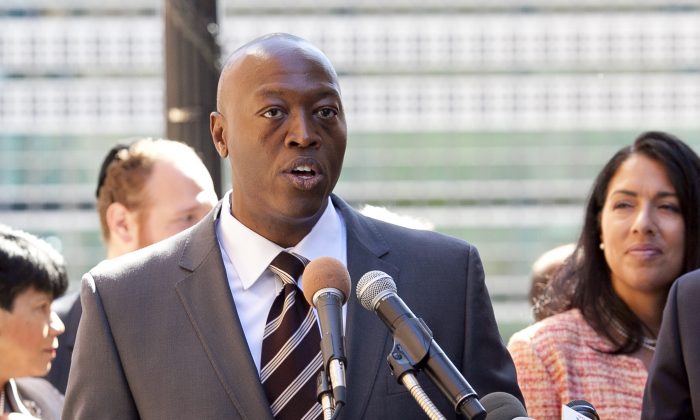 NEW YORK—The final comptroller debate, which was to take place on Oct. 24, was canceled by the Campaign Finance Board (CFB) after Republican candidate John Burnett failed to qualify.

To participate in the second debate, a candidate must have raised and spent $200,000, but the fundraising threshold can be lowered to $25,000 if a candidate receives at least 10 percent in either a Marist or Quinnipiac University poll.

Burnett has raised $23,414 and spent $31,943, according to the latest CFB filings. As of press time, Marist, nor Quinnipiac, has conducted a poll for the comptroller race during the general election. According to CFB rules, if no poll is conducted, the fundraising criteria will be the only method used to determine eligibility.

On Sunday Burnett released a blistering statement condemning the CFB.

“The four and a half million voters of New York City deserve to hear an exchange of ideas, and an agency that was created to protect incumbents and career politicians shouldn’t stand in their way,” said Burnett in a statement. “I am sanguine that Borough President [Scott] Stringer shares my outrage and encourage him to join me in demanding that the voters are given the opportunity to have this debate.”

Burnett added, “This is just another example of why all challenger candidates, particularly those from outside the Democrat Party machine, are cynical about the Campaign Finance Board and it’s incumbency protection plan.”

Burnett took particular exception to one of the requirements being the polling, something he argued was ridiculous based on the fact the CFB does not conduct them.

“The CFB has the audacity to say they are canceling the debate based on criteria that the agency has no control over,” Burnett said. “This shows that they are either incompetent or corrupt—take your choice.”

Independent mayoral candidate Adolfo Carrion Jr. was left out of the recent mayoral debates for not meeting the polling requirement. He only received two percent in the polls.

The Epoch Times reached out to the Stringer campaign for comments, but it did not return an immediate request for comment.