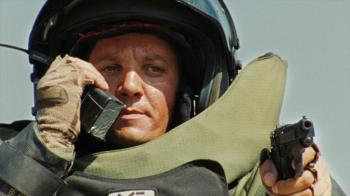 John Adams, in a letter to his long-time friend Dr. Benjamin Rush, said: “War necessarily brings with it some virtues and great and heroic virtues, too. … What horrid creatures we men are that we cannot be virtuous without murdering one another.”

On this Memorial Day, as Americans look forward to the long weekend that has come to signify the commencement of summer, perhaps one way to honor the true meaning of this day of remembrance is to look back at some of the most powerful films on war.

The plethora of outstanding pictures dealing with this subject that have surfaced in the last few years have illustrated with excruciating realism the experience of the soldier and the virtues and evils of war. As we honor our fallen heroes, here are a few picks that deserve another look.

Fighting For Life, by Terry Sanders, Academy Award-winning filmmaker, premiered Memorial Day of last year, bringing the war into our reality with vivid clarity. "Fighting For Life, [is] a feature documentary I made about military medicine—the Iraq and Afghanistan Wars and the wounded,” said Sanders in the Huffington Post website. “The film focuses on the incredible skill, compassion, and dedication of military doctors, nurses, medics, and medevac teams and the heroic fight that begins when the battle ends.”

During his four-and-a-half days filming at the Air Force Combat Support Hospital in Balad, Iraq, in January 2006, Sanders wrote notes that he later published in a blog:

“We plunge into filming, ‘capturing reality’ with our hand-held HDV camera, using only available light, making ourselves as ‘invisible’ as possible. No one pays attention to us. Too involved in saving lives and limbs.”

A classically suspenseful and gritty film is The Hurt Locker, which won Best Picture and Best Director at the Academy Awards this past year. It focuses on the specialized squad known as United States Army Explosive Ordnance Disposal (EOD). The film follows the EOD unit during the Iraq War under the enormous pressure of bomb defusing, insurgency, and interpersonal tensions.