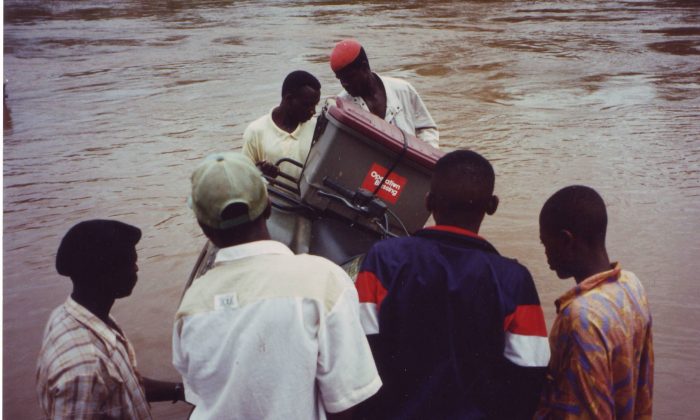 NEW YORK—Five years ago, filmmakers David Turner and Lara Zizic embarked on a lengthy journey of what turned out to be one of the most unbelievable televangelist scam stories in the history of religious fraud.

It started when Turner was in Holland working on a fiction feature. One day he read a news piece by Bill Sizemore, a journalist at The Virginian-Pilot, about televangelist Pat Robertson. The article accused Robertson of running a huge gold and diamond mining operation under the cover of his charity.

Turner quickly realized the story sounded stranger than fiction. He and co-director Zizic began tracking down the eye-witnesses and the key players over many years.

“Mission Congo” is an hour long feature about how during a massive humanitarian crisis in Zaire (now the Democratic Republic of Congo) Robertson extolled the great achievements of his relief organization “Operation Blessing” over the air. Meanwhile he had a diamond mining mission in another part of the country.

Virginian-born Robertson was involved in politics, and ran for the Republican candidate in the 1988 presidential election. Robertson is also a famous televangelist and hosts one of the most popular religious shows: The 700 Club. Following the 1994 Rwanda genocide, Robertson claimed that OB was providing medical aid to thousands of people while he was using cargo planes owned by OB to transport mining equipment.

How did he pull it off? He teamed up with the then-Zaire dictator Mobutu Sese Seko and headed the African Development Corporation. Providing little to the people and even taking credit for the work of Médecins Sans Frontières, Robertson to this day continues to collect donations via his Operation Blessing website.

An investigation by the Attorney General of Virginia found Robertson not guilty. Both governor and attorney general received large campaign donations from Robertson.

A five-year long journey of filmmaking meant a search for anyone and everyone to interview from Europe, Africa, and North America. Turner and Zizic’s trips in Congo resulted in personal adventures. Turner recalled that once he was awoken by a Congo gunman who accused him of owing $15,000.

“He said ‘Your brother (meaning Pat Robertson)—one of his guys owes me money for renting a house,’” Turner said. Turner is no relation of Robertson’s. After getting help explaining this, Turner got away.

Robertson didn’t reply to Turner’s request for an interview. When asked if Robertson did anything to stop the film from being shown, Turner said “I can’t really comment.”

The film premiered this September at the Toronto International Film Festival.

Ole Anthony is the president of the Trinity Foundation, a charity organization turned religious fraud investigation group. Anthony has been digging up dirt on the biggest televangelist networks since early ’90s.

“I knew about [the Pat Robertson case] back in the early ’90s,” Anthony said. At that time, the Trinity Foundation was being sued by another televangelist. Defending the organization kept Anthony’s hands full.

In fact, his organization gets sued so frequently, Anthony says he can play an attorney in a film, because he’s garnered so much experience.

He was approached by Zizic for an interview in the documentary, and not only does he speak extensively about religious fraud in the film, he was also able to refer the filmmakers to some of the victims who donated to Operation Blessing.

“There’s more fraud in the name of God than any other kind of fraud in America, and we’re the only group in the world that investigates religious fraud. It’s just crazy,” Anthony said.

Religious crime accounted for $34 billion in 2011, and is projected to almost double by 2025, according to the International Bulletin of Missionary Research journal, which analyses Christian mission history.

Attorneys have turned sour on Anthony. In one lawsuit he was described as ‘a wolverine with a very bad toothache.’

“I’ve been called the leader of a cult for the last 40 years,” Anthony said.

Anthony is a devout Christian. He takes the homeless into his own house, and believes that all charity organizations should operate under the same purpose as the original church and use half the church’s budget for charitable needs.

“If the church today, across the world, would devote 40 percent of their budget to meet the needs of the poor, it’d be fixed overnight,” he said.

Anthony says that many other documentaries investigated the Robertson case, but none was released. Anthony said that no other media took the time to do such in-depth reporting as Turner and Zizic did, which is why the story hasn’t gotten out until now.

“Back then is when they should have done what Lara and David, go over there and interview the people,” he said.

But Anthony is moving on. He recently submitted 38 reports on various ministries that “were breaking all kinds of laws.”

He is working on other investigations, like that of the Daystar Television Network. The network was started as a Christian TV station by minister Marcus Lamb and his wife in 1985 in Alabama. Daystar’s programming reaches 680 million households globally.

Robertson’s Operation Blessing International still has an operating website with a link to collect donations.