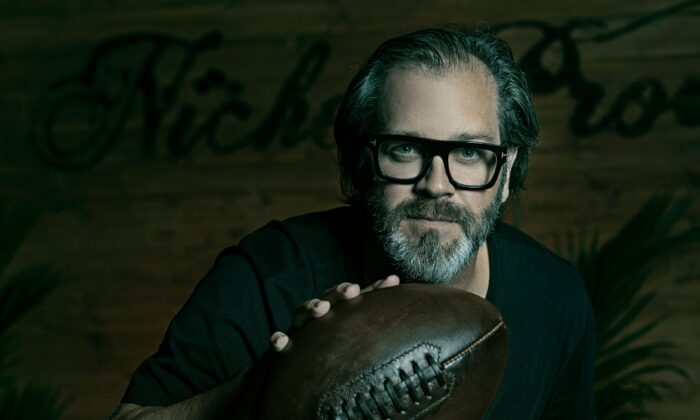 Award-winning filmmaker Allen Farst is writing and producing a movie about the beginnings of the National Football League and the first game in NFL history played on Oct. 3, 1920. The move, "Triangle Park" is set in Dayton, Ohio, and is planned for a fall release. Farst began filming for the movie the last week of April, and is receiving a lot of support for the film which he hopes will reach a worldwide audience. (Photo courtesy Allen Farst)
Entertainment

Filmmaker Working to Bring Beginning of NFL to Life

DAYTON, OHIO – Award-winning filmmaker Allan Farst is getting ready to charge past the 50-yard line and bust through the end zone of bringing to life on the movie screen one of Dayton, Ohio’s, most unsung stories.The feature documentary is titled Triangle Park, the place where the Dayton Triangles played the Columbus Panhandles in the first National Football League game on Oct. 3, 1920.

The Triangles beat the Panhandles, 14-0, recording the first win in NFL history.

Lou Partlow scored two touchdowns and George Kinderdine kicked in two extra points. There were more than 4,000 fans who reportedly paid the hefty price of $1.75 admission and crowded the sidelines to watch the event, according to the Dayton Daily News.

They were the true gladiators and leatherheads during the embryionic stages of the NFL, when nicknames were in style.

Farst, who owns Niche Productions in the south Dayton suburb of Centerville, is writing and producing the movie. He wants to tell the story of the formation of the NFL, the Triangles’ first game, and provide a portrait of what was happening in the then fast-growing city around 1920.

He hopes to release “Triangle Park” in the fall and premiere it in select theaters and in all 32 NFL markets.

“This story is long overdue to be told,” Farst told The Epoch Times. “I first started thinking seriously about the Triangles’ story when they were coming up on the 100th anniversary of that first game in 2020. What was the real story? Who were the players?

“NFL still is big business and is generational for its fans,” Farst added. “Football has fans all over the world. I think the Cincinnati Bengals playing in the Super Bowl earlier this year has helped propel interest in football around Dayton moreso than it has had in a while.”

The first NFL game remains a point of pride among the families and descendants of those who played on the team such as hometown heroes Norbert Sacksteder, Lee Fenner, Howard Thiele, Partlow, and Kinderdine. Yet, the team remains a historical footnote in the beleaguered city revered as the birthplace of aviation and once “The Town of 1,000 factories.”

“Once I started getting into the story of the Dayton Triangles, I found out there was so much out there,” Farst added. It was just a matter of putting it all together. I knew I had a five-star dinner–I just needed to put all the ingredients into it so it could be done the right way.”

Edward Deeds and Charles Kettering (inventor of the electric ignition and self-starter for the automobile) were business partners who owned three factories in downtown Dayton. The three factories formed a triangle on the map.

Although the players were reportedly paid $75 to $100 a game for an eight to 10-game season, many Triangles players still held their day jobs through the 1920s. After playing a game on the weekend, players would travel back to Dayton in a rented Pullman car hitched to the back of a train so they could return to work on Monday.

Mark Fenner of Dayton, whose great grandfather, Lee Fenner played left end on the Triangles all of the team’s 14 years in Dayton, is Farst’s research assistant and has been providing him with material for the movie.

“Unfortunately, I did not get very many football stories passed down to me, so this journey is me trying to learn as much as I can,” Fenner said.

Preserving that part of sports history is further helping put Dayton on the map, and the relatives of the Triangles are grateful, Fenner said.

“I think what Allen is doing is great,” Fenner said. “History can be lost. It comes down to a fine line where it can be lost forever, but I don’t think there’s any danger of that now with the Dayton Triangles.”

As the years went on, the team was unable to repeat its early successes. In its last two years as a Dayton franchise—1928 and 1929—the team won no games. Then, on June 1930, a bootlegging syndicate out of Brooklyn, New York, bought the Triangles. The Triangles became the Brooklyn Dodgers. Through years of transitions and being purchased to play in other cities, the Dayton team is now the Indianapolis Colts.

“The families of the players have been hungering for something like this for years,” Farst added.

When Farst’s film is finished and comes to fruition on the movie screens of competitive film festivals throughout the U.S., he hopes not only to put his native city on the map but to score a touchdown in appealing to generations of football fans across the nation if not the world.

For now, an Ohio Historical marker marks the spot at Triangle Park where the game was played just east of Riverside Drive and Ridge Avenue. The former football field is next to Howell Field, a baseball diamond where Dayton Amateur baseball Commission’s Class AA played

The wooden-frame building that served as a locker room for the Triangles was moved to Dayton’s Carillon Historical Park in 2012 to be preserved for a Dayton area sports history exhibit.

“That’s an amazing thing to have saved,” Farst said of the locker room building. “It’s something that actually was used at Triangle Park by the players. They walked into it, they occupied it. It’s like having one of the Wright Brothers’ airplanes.”