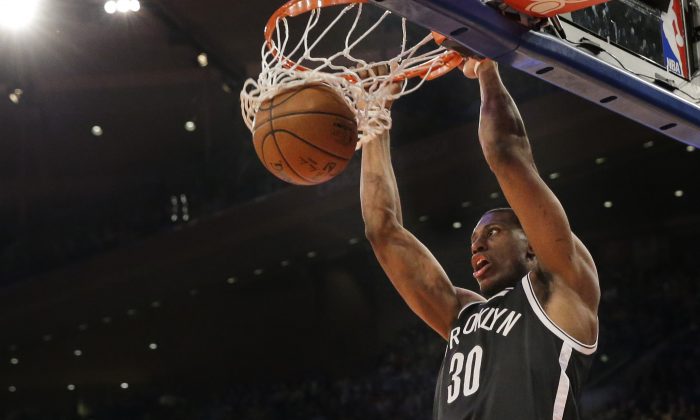 The Brooklyn Nets are on a five-game winning streak and appear poised to make the playoffs, and win at least a few games in the first-round.

Brooklyn went 21-31 before the All-Star break in February, and was on the fringes of the playoff race in the weaker Eastern Conference. But they’ve gone 13-9 since the break, scoring more points and cutting down on mistakes and bad shots.

What else has changed?

The team’s Big 3 has stepped up since returning from injuries and to the starting lineup. New acquisition Thaddeus Young is much better than the man he replaced, Kevin Garnett. Brooklyn found some much-needed defense in Markel Brown and some much-needed range from Bojan Bogdanovic and Alan Anderson.

Lopez’s re-emergence as one of the best offensive centers in the league has been the biggest reason the Nets are winning. He started with the first game back from the break, with 22 points and 14 rebounds in a win over the Lakers.

Lopez had a few quiet games but absolutely went off in March. He dropped 26 points in a stunning win over the Warriors, then scored 24 points or more in six of seven games in the latter part of the month. Brooklyn went 6-1 during those games.

Shot selection has played a big part in Lopez’s recent dominance. In the last eight games, he’s attempting about 18 shots a game–and making about 62 percent of them.

A key difference in his selection is more shots around the bottom half of the key, still inside the paint but not in the restricted area. This is the area he receives a lot of passes when he and Deron Williams or Joe Johnson work a pick and roll.

Lopez’s soft touch enables him to be a threat almost anywhere inside the three-point line, but makes him especially lethal in these types of opportunities. Opposing big men aren’t used to guarding centers that have this kind of range, and Lopez consistently makes them pay. Over the past eight games, Lopez is shooting 50 percent from that area, and well over 50 percent in similar areas on both sides of the basket.

The extra shots closer to the basket are coming as Lopez shoots fewer jump shots outside the key, which has helped boost his almost unbelievable field goal percentage.

Lopez is also shooting much better down low–67.1 percent to 53.8 percent for the rest of the season–largely due to his patience on the block as well as nice set-ups from Williams, Johnson, Jarrett Jack, or Alan Anderson. Lopez shoots much better off assists versus unassisted baskets, and almost all of the assists this season have come from one of these four players.

Williams and Lopez have a particularly potent connection, with Williams assisting Lopez 33 times over the past eight games and 97 times across the entire season. Jack has 69 connections with Lopez over this season, but his playing time has plummeted recently with coach Lionel Hollins relying on Williams more and more. Johnson has 55 assists to Lopez this season, and Anderson has 17.

Patience doesn’t necessarily mean taking a long time, though. Lopez moves surprisingly fast for how tall and big he is, and often catches defenders with his moves. His height also enables him to shoot over almost everyone in the league.

“His touch right now near the basket is off the charts,” Williams told the New York Post recently. “We just need to keep feeding him in pick-and-rolls and exploiting it whenever we have a chance.”

Lopez holds on to the ball for less then two seconds about seven out of every 10 times he touches it, according to statistics from the NBA’s tracking cameras. He almost never holds onto the ball for six or more seconds.

Lopez’s surge has understandably raised more questions about his impending decision–whether or not to opt out of his $16.7 player option for next season. There’s arguments on both sides–if he opts in he gets the chance to take advantage of the higher salaries coming in 2016 with the raised cap, and will also get the chance to prove he’s capable of staying healthy and being a franchise player (he’s currently 27). In addition, his contract could include a no-trade clause.

However, if he opts out he could secure a long-term deal from the Nets or another team this summer, a distinct possibility considering his ongoing injury issues. He couldn’t include the clause, though, since he wouldn’t have enough time in the league to qualify.

At 30 and after battling a number of injuries, Deron Williams will likely not return to the form that prompted the Nets to first acquire him.

It’s almost unthinkable now to most Nets fans that Jack and Mason Plumlee were starting at one point this season even though Lopez and Williams were healthy, although at other times it was because one or the other was injured. Williams missed most of January while Lopez missed eight games in December and played fewer minutes as he sought to return without becoming injured again.

Minutes for both, especially Lopez, have increased as the season has gone on. Lopez has played 38 or more minutes in five of the last eight games, while Williams has hovered around 30 minutes a game recently.

Williams is averaging 12 points, 8 assists, and 4.8 rebounds over the last eight games. He’s also cut down on his turnovers, upped his three-point percentage, and recorded more steals.

Williams looks more and more comfortable running the offense–he looked horrible earlier this season–and his connection with Lopez has helped the Nets win some close games. Williams has also been building chemistry with the two new starters, Thaddeus Young and Markel Brown, and has always had a pretty good rapport with Johnson.

Williams strong play also brings more focus on his future. Williams has an outsized contract that gets bigger as time goes on. He’ll make $21 million next season, and has a $22.3 million player option for 2016-17. That option, as well as a 15 percent trade kicker, makes him difficult to trade and bring back something of value.