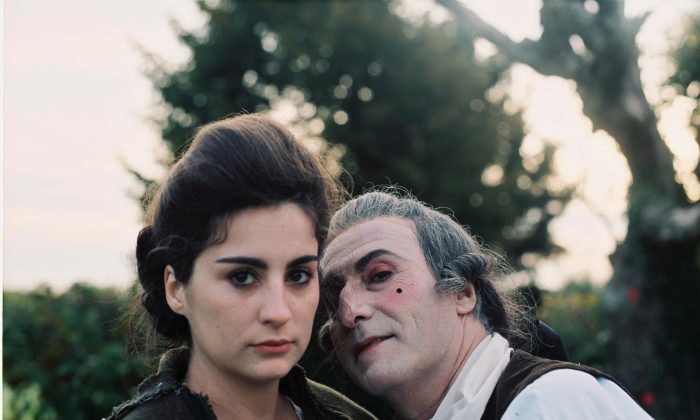 Claudia Robert and Vicenç Altaió in a scene from “Story of My Death.” (FilmLinc)
Entertainment

Lothario From Beyond the Grave

Film Review: 'The Story of My Death'
By Joe Bendel
biggersmaller
Print

Remember Tony Curtis in the naughty Euro-farce “The Amorous Mis-Adventures of Casanova”? Sure you don’t, but forget it anyway. This incarnation of the aging rogue is worlds removed from Curtis’s leering carouser.

It is the end of the party and the close of the Enlightenment era for Casanova, announced by none other than Dracula himself in Albert Serra’s defiantly dense and stately slow “The Story of My Death.”

Casanova has become a dirty, sacrilegious old man. He still pursues his pleasures where he may, be they pomegranates or chambermaids.

Initially, this all seems like a good gig to his new manservant, whose primary duties appear to be listening to Casanova pontificate on whatever. However, he becomes somewhat disillusioned with his master during their questionable Carpathian holiday.

Naturally, Casanova starts trifling with the daughters of a suspiciously accommodating land owner, but the undead Count also has eyes for the lasses.

On paper, “Death” probably sounds like a super commercial mix of sex and gothic bloodsucking, but Serra’s approach is unapologetically meditative, bordering on the explicitly experimental.

This is not Anne Rice or even Chelsea Quinn Yarbro. It is 148 minutes—and viewers will feel each and every second.

Serra might have a healthy contempt for narrative, but he has an eye for composition. Frame after frame intentionally evoke the Old Masters with their chiaroscuro effect and Serra’s extraordinary attention to mise-en-scène.

Even though the score is credited to four composers (count them: Ferran Font, Enric Juncà, Joe Robinson, and Marc Verdaguer), there is not a lot of music heard during its two and a half hours. Yet, in a rare genre concession, what there is sounds surprisingly distinctive and creepy.

Heading a typical Serra cast of nontraditional actors, poet Vicenç Altaió rather livens up the proceedings, hedonistically chewing the scenery and relishing his self-consciously wicked dialogue.

Eliseu Huertas also has an intriguing screen presence as the Count, and his high-pitched keening is truly unsettling. Still, it is strange that he looks as old (or older) than Altaió’s Casanova, yet his Dracula is supposed to represent the coming era of Rousseau’s Romantic savagery.

“Death” could be considered the “Hammer Horror” film that Terrence Malick has yet to make. Few vampire films feature half as many scenes of wind rustling through the grass. Frankly, Serra’s work demands to be considered solely on its own terms.

Maddening and anesthetizing for the uninitiated, “Death” still takes viewers from one specific point to another. Selectively recommended for hardcore fans of Malick and Ben Rivers, “The Story of My Death” screens March 29, at the Walter Reade, as part of the 2014 New Directors/New Films series.