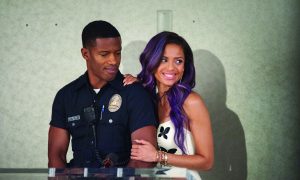 Through the eyes of Miss Tibet
By Joe Bendel
biggersmaller
Print

For 10 years and counting, second- and even third-generation exiles have competed in a beauty pageant to represent a country they have never lived in. That nation is Tibet, still held captive by their Chinese Communist occupiers.

Obviously, this is no ordinary beauty contest. While their numbers are small, their consciousness is high. Documentarian Norah Shapiro follows Tibetan-American Tenzin Khecheo as she competes for the 10th annual Miss Tibet crown in “Miss Tibet: Beauty in Exile,” which screens during DOC NYC.

When most people think of Tibet, their mind’s eye pictures monasteries, temples, and snow-capped mountains—but glamour, no so much. Enterprising impresario Lobsang Wangyal set out to change that with the Miss Tibet pageant, envisioning it as a means of empowering young women and providing a focal point for national pride. Despite his obvious slickness, the pageant seems to be taking hold, even though there is often controversy surrounding the swimsuit competition.

Much of “Exile” explores that tension between tradition and modernizing influences through Khecheo’s eyes. Initially insecure about her rusty Tibetan, she dramatically reconnects with her cultural heritage.

One of the cool aspects of the Miss Tibet contest is the extent to which Tibetan music, customs, and history are integrated into the program. However, there are problems with the pageant that will come to light, adding a note of unexpected ambivalence to the third act (but be assured, all of the contestants are clearly a credit to Tibet).

In contrast, there is no equivocating in “Exile” when it comes to the realities of China’s occupation. Shapiro’s historical context might come from an illustrated children’s book (quite an elegant one, really), but it is still right on the money.

In fact, part of the impetus for the pageant in general and Khecheo’s personal participation is to raise international awareness, since conventional protests have produced no results to speak of.

Khecheo’s personal development arc and the cultural synthesis the pageant represents are all strong stuff that easily sustains the relatively short film.

Yet, it raises issues of double standards that could have been explored further. At one point, we learn a previous Miss Tibet might have been allowed to compete in an international pageant, but China insisted “Miss Tibet, China” must have been emblazoned on her sash. She refused. You wonder how often that sort of thing happens.

For instance, if a fictitious country like “Palestine” is allowed to submit films for best foreign language Oscar consideration, Tibet should have the same right. Yet, if they put Pema Tseden’s latest film into contention, would the Academy accept it or bow to Chinese pressure? How many other such instances might there be?

Regardless, “Exile” does what it does quite well. It follows a highly engaging and likable POV figure in Khecheo through a surprisingly dramatic journey. Perhaps most valuably, it offers a fuller, more diverse picture of Tibetan identity while also providing a timely reminder of Tibet’s captive nation status.