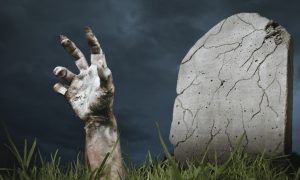 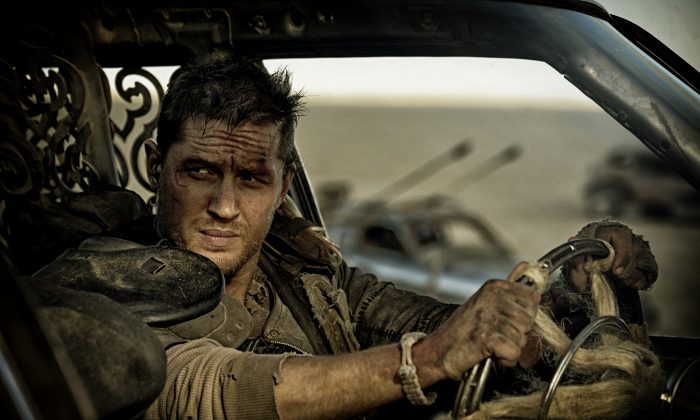 If you put Tom Hardy behind a wheel, something special happens. His last vehicular vehicle was the outstanding slow-burn drama “Locke.” The last time George Miller was behind a camera it was for the forgettable, darkness-flecked kids flick “Happy Feet 2.” Both are returning to familiar terrain for this dust kicked rebirth of a cult icon, one who has been wandering a nostalgic wasteland for over three decades.

If you think you know what you’re expecting when you set out on “Fury Road,” think again. Preconceptions will be flipped, tropes subverted, and a surprisingly resonant narrative will unspool before eyes that will require drops by journey’s end.

To say the plot is simple would be to do it a disservice, but it’s essentially A to B and back again. Dropped into a scored earth dystopia, very little backstory is afforded: we will learn as the wheels turn.

Familiarity with the originals isn’t a pre-requisite. Max (Tom Hardy) is a man reduced to a single primal instinct: survive.

He isn’t doing a great job from the off, kidnapped by the skeletal lackeys of wasteland dictator Immortan Joe (Hugh Keays-Byrne), a plastic entombed, Bane-faced wheezebag, who controls the water and thus has power over the land.

The catalyst for the mayhem that drives the movie is Charlize Theron’s Furiosa, a wounded (in every sense of the word) henchwoman, who deviates from her mission along with Immortan Joe’s birthing slaves, and makes a break for her homeland, leading to one almighty race through hell.

There comes a moment half way down “Fury Road” in which Hardy’s monosyllabic slab of a man has a choice to make with his final bullet, one that is indicative of the entire film. Without spoiling anything, it condenses the female empowerment narrative which drives the film, along with the smirk-inducing sense of threat-laden fun that Miller orchestrates.

In fact, it should really be called Furiosa Road, because the story is hers. Max is somewhat useless, spending the first portion of the movie strapped to the front of a car, then muzzled for the next portion, and when he does get involved with the lorry jumping and pole swinging, he inevitably has to be saved by this team of femmes he’s reluctantly joined forces with.

It’s not played for patronising laughs though; these are strong female characters in a man’s world, and Theron completely owns the movie with her tear-moist eyes and rabble-rousing determination. Dialogue is sparse throughout, but when she speaks you feel every word.

Hardy plays his part too: the closest he gets to emoting is a smile and thumbs up to Rosie Huntington-Whitley’s really-rather-good baby-maker, but the fallibility of his quiet brute adds to a genuine sense of peril as you root for this ramshackle runaway crew.

The action is vehicular spectacular, which aside from the odd necessary CGI embellishment, is entirely practical stunt work. When cars thud, you feel it in your chest, and as characters roll in a pyrotechnic accompanied crash, you wince. It has visual heft in a way that Zac Snyder can only dream of. It’s like the stock car version of “Wacky Races,” and the high frame rate (which appears to turn Max into Benny Hill at times) perfectly suits the manic craziness.

Miller planted the seeds to this franchise in 1979. Now this is a full-on world creationist vision, the unrestrained likes of which you haven’t seen before. Exhaustion was never this enjoyable. “Fury Road” is the loudest silent movie you’ll ever see.