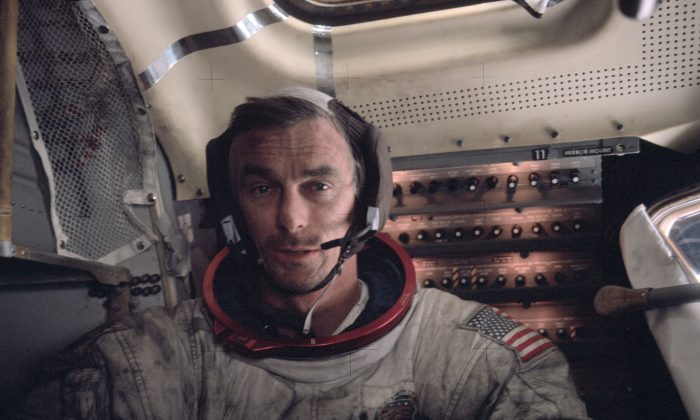 One of twelve Americans
By Joe Bendel
biggersmaller
Print

It now seems hard to believe given Russia’s current domination of space travel, but the Soviets never landed on the Moon. Captain Eugene Cernan was the eleventh man to walk on the lunar surface, but he was the last to leave. It is a notable distinction, but one he would rather not hold indefinitely.

Cernan reflects on his career as an Apollo astronaut and offers some advice for the future in Mark Craig’s “The Last Man on the Moon.”

Everything you remember from ‘The Right Stuff’ was true.

Like all the best astronauts, Cernan had been a real deal Naval aviator before Deke Slayton recruited him for the second wave of Apollo astronauts. It seems everything you remember from “The Right Stuff” was true. The Apollo astronauts worked hard, studied hard, and played hard. Competition to be on each historic flight was fierce, but mostly collegial.

Cernan would know better than most. When budget cuts forced NASA to slash its planned Moon expeditions in half, he found himself jockeying with Dick Gordon to command the final Apollo 17.

As you would expect, there are a number of terrific behind-the-scenes stories of our nation’s space program. In addition to Cernan, Craig scored interviews with his fellow astronauts, Alan Bean, Charlie Duke, Jim Lovell, and the still only slightly disappointed Gordon, as well as legendary NASA flight director Gene Kranz, and head of mission operations, Dr. Chris Kraft.

Cernan’s current and former wives also get to have their say, but he is always the first to admit he neglected his family duties during the Apollo years.

The now overlooked Gemini program also gets its due, particularly Gemini IX, which Cernan still considers a troubling failure, but Kraft defends as a valuable learning experience.

Without question, “Last Man” offers plenty for space program buffs, but Craig’s execution will pleasantly surprise cineastes. He and cinematographer Tim Cragg capture some striking visuals and he knows when to pull back to appreciate a quiet moment when it is appropriate.

For some reason Moon landing conspiracy theories are enjoying a spat of fringe popularity, popping up in the dumb comedy “Moonwalkers“ and “Operation Avalanche,” Matt Johnson’s disappointing found footage follow-up to “The Dirties.”

“Last Man” (co-executive produced by racing legend Sir Jackie Stewart) arrives like a breath of fresh air, celebrating the courage and adventurous spirit of the first and second generation of NASA astronauts. It is also a timely wake-up call for renewing our space-faring capabilities or be beholden to the Russian program for the long-term.

Highly recommended as both cinema and oral history, “The Last Man on the Moon opens this Friday” (Feb. 26) in New York, at the Cinema Village.