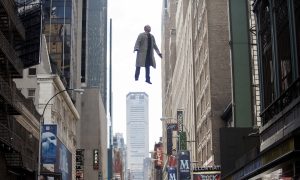 After 20 years of performing, choreographing, coordinating, and directing movie stunts together—not to mention setting up their own stunt company—Stahelski and Leitch have become experts at big-screen action.

Starting as stunt doubles for Keanu Reeves and Brad Pitt, they’ve grown to oversee stunt action on blockbuster fare such as “The Wolverine,” ”Teenage Mutant Ninja Turtles,” and “The Hunger Games” franchise. For the last few years, they’ve been ready to take the next step: finding a film of their own to direct.

Reeves helped make that happen when he introduced them to “John Wick,” an action-saturated thrill ride opening today.

“When I got the script … I immediately thought of Chad and Dave for the action design, but I was secretly hoping they’d want to direct it,” Reeves said in a recent interview. “I knew that they would love the genre and I knew that they would love John Wick. And I thought the worlds that get created—the real world and then this underworld—would be attractive to them, and it was.”

Reeves stars as the titular character, a retired killer-for-hire who’s drawn back into the underworld, seeking revenge after a group of thugs steal his car and kill the dog given to him by his dead wife. Willem Dafoe also stars.

After reading the script, Stahelski and Leitch, both martial arts experts and Bruce Lee fans, told Reeves they wanted to tell the story of “John Wick” with a graphic-novel twist, creating a stylized, heightened reality where the suit-clad killer could systematically shoot 84 people in a nightclub without batting an eye or wrinkling his clothes.

They also wanted to craft a character whose outsized motivations would make sense to audiences. And they wanted to prove to themselves that, after 20 years in the movie business, they could tell a story from top to bottom as filmmakers.

“It was the challenge—and the ego of ourselves—to prove that we could do something different,” said Stahelski, a tall, lean man in his mid-40s with an authoritative demeanor that belies his easy smile. He’s been friends with Reeves since working as his stunt double in “The Matrix” movies.

Reeves supported the pair’s pitch to producers, and the veteran stuntmen had their first directing gig.

Stahelski and Leitch, who was Pitt’s stunt double in “Fight Club” and “Mr. and Mrs. Smith,” formed their stunt company, 87Eleven Action Design, in 2004. Their facility, tucked inside an industrial complex near Los Angeles International Airport, is a hub of muscle, flexibility, and creativity, with a team of 16 choreographers on staff.

One section of the warehouse space holds weight machines and gymnastics mats; another has a springboard floor where lithe athlete-actors practice artful falls into stacks of empty cardboard boxes. Various swords, battle-axes, and medieval weapons stand in the corner beside a wood-and-metal rig that can be adjusted for parkour or high falls. Posters of the movies the company has worked on line the walls.

Reeves spent three months working with half a dozen 87Eleven athletes to prepare to become John Wick, learning judo, jiujitsu, and other fighting styles, plus mastering firing and reloading an assortment of high-powered weapons.

Stahelski and Leitch typically take on several big projects a year as stunt coordinators and second-unit directors, creating and shooting action sequences for other directors’ big-budget projects. But they stepped away from those opportunities to spend 18 months making “John Wick.”

“Stunt coordinating is a good training ground for directing, because you have exposure to all the departments in film,” Leitch said. “There’s a lot of directing within the stunt coordinator’s job.”

Stunt coordinators also have to understand camera angles to make fight sequences convincing, he said, and they know how to work with actors because they spend months preparing them for action roles. Perhaps the best known stuntman-turned-director is the late Hal Needham, who left stunts behind to write and direct 1977’s “Smokey and the Bandit.”

Though Stahelski and Leitch shared duties on “John Wick,” just as they do with 87Eleven, Stahelski is credited as the film’s director and Leitch as producer. Maybe because they’re hoping for more opportunities behind the camera.

“Our focus has always been to be filmmakers first and department heads second,” Stahelski said. “Now we’re following our passion and our dream.”