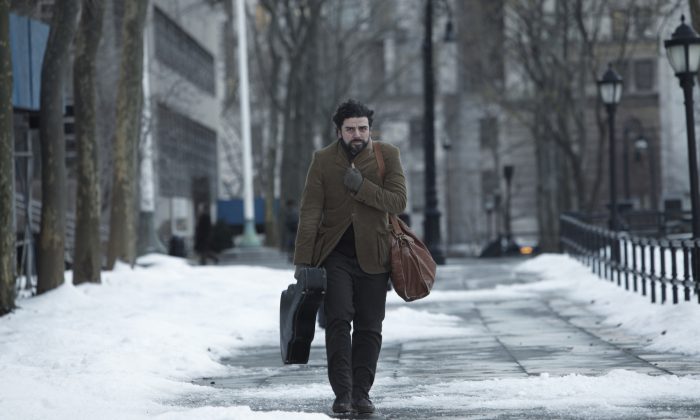 The titular protagonist, Llewyn Davis (the somewhat scruffy but attractive Oscar Isaac), is seriously strumming his guitar onstage at a Village café of the period. The blurry audience in the background may or may not be paying attention to his soulful struggles. It doesn’t matter to Davis one way or the other; he’s pursuing his art.

Another offering by Coen brothers Joel and Ethan, “Inside Llewyn Davis” starts out gently enough. How can one help but be seduced—and thrown off-guard—by the limpid, exquisitely soft blue-gray photography (courtesy cinematographer Bruno Delbonnel)?

And Davis sounds pretty good. Why he’s not more successful is just one of those things. Maybe he lacks charisma. Maybe not.

Financially, Davis’ ends are not meeting smoothly. For all practical purposes he is virtually homeless and has to cadge a night’s sleep at the homes of various friends and even mild acquaintances. There is the Upper West Side couple, a college professor and his wife, who adopt Llewyn as a sort of mascot. They can show this odd personage off to their friends and prove how open-minded they are.

Unfortunately, the couple has a cat which escapes while under Davis’s care. The feline becomes his burden as he pursues the next place to stay. As luck would have it, the cat eventually is saved, via interference from Lady Luck (or the Coen brothers).

A less benign sleep-over takes place at the apartment of folksingers Jim (Justin Timberlake) and Jean (Carey Mulligan). Although Jean behaves and looks like an angel when performing, she now becomes a virago, accusing Davis (whether rightly or wrongly) of messing up her personal reproductive situation due to a prior mutual encounter.

Happily, Davis is offered a ride to Chicago to audition for prestigious manager Bud Grossman (F. Murray Abraham). But the ride must be endured with the loud-mouthed Roland Turner (John Goodman) ranting from the backseat and Johnny Five (Garrett Hedlund), who serves as aide to the oversized gent when he must struggle, on crutches, into restrooms of various gas stations along the route.

Finally—Chicago. Manager Grossman listens intently to Davis’s audition. One hopes, one believes, that Davis will be saved, vindicated at last.

If only things were that simple.

Throughout the film’s journey we hear an exquisite soundtrack of the era (under the direction of T -Bone Burnett). We see snippets of America as the places looked then. It’s a kind of sentimental journey. Bob Dylan appears briefly in the background of one shot, just long enough to get a gasp from some viewers.

Two elements stick in my mind regarding this film. Firstly, the actors involved have, to my mind, never given better performances. John Goodman seems almost to burst into the viewer’s lap; F. Murray Abraham, a pretty intense actor basically, here burns through the screen. Oscar Isaac, with wild dark hair and beard, seems to exude star quality even though the script may disagree.

Secondly, it’s a fascinating take on a performer who hasn’t made it. Kind of an antidote to “A Star Is Born.” And there are a lot of them out there. Some with tremendous talent. Go figure.