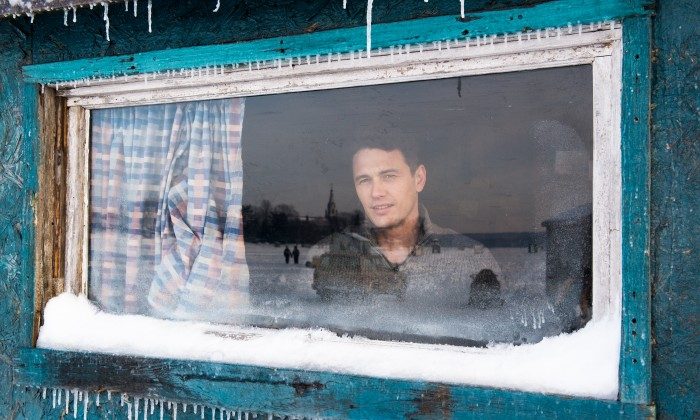 A man wakes up in a tiny wooden hut, just barely larger than the cot where he sleeps. Sunbeams light up a small notebook lying on a table, taking on larger-than-life proportions on the screen—its presence is ominous.

Tomas (James Franco) sips his coffee kept warm on a wood-burning stove. The struggling novelist writes a few lines in the notebook. Then from the outside we see him looking out of the window, with a snow-filled landscape reflected in the glass. He walks out of the hut. It’s cold and barren in a way that makes one turn inward.

The whole scene—following Tomas’s sleep to awake state, from interior close-ups, to exterior wide-angle shots—invites the viewer to enter the character’s head, heart, and hopefully, even his soul.

Healing is a very important part of our lives and a way to it is not always so obvious.
— Wim Wenders, director

Director Wim Wenders would have never shot an opening scene like that in such a tight space had it not been in 3-D, he said at a Q&A (during a retrospective of his films in September at the IFC Center in New York). The title of his new film, “Every Thing Will Be Fine,” suggests a fairy tale—something like “and they lived happily ever after,” Wenders said. But this is not your usual Disney fantasy, Hollywood action, or special-effects-driven 3-D movie.

Tomas lives mostly through his work to a degree that is paradoxical in how he affects others. One day a road accident changes his life. A boy dies. Nobody blames him for the tragedy; still he has to learn to live with himself somehow.

In the course of over 10 years, he breaks up with his girlfriend, retreats further into his writing, becomes a celebrated author, and tries to rebuild his life with a new girlfriend and her daughter. With the generosity of the grief-stricken mother of the boy he accidentally killed, he learns to forgive himself and eventually come to terms with the lives of the strangers he has affected.

“Healing is a very important part of our lives and a way to it is not always so obvious,” Wenders said.

Based on an original script by Bjorn Olaf Johannessen, “Every Thing Will Be Fine” is obviously not a happy story, but it’s not a sad story either. It’s an emotionally powerful film about trauma, forgiveness, and the ineffable long-hidden process of healing.

Approaching healing from a trauma from the inside, Wenders has taken on quite a challenging process to convey.

The exposition and dialogue are minimal, so every line, image, and action takes on an even greater, almost iconic significance, especially in 3-D: a notebook, a man carrying a boy on his shoulders, a book in flames, a long hug, to name a few. The music score, with a reoccurring theme, by Alexandre Desplat, seamlessly complements the narrative, as in most Wenders films.

Wenders chose his director of photography, Benoît Debie very well. The 3-D photography was calibrated to be as close as possible to our natural vision—apart from a short scene of some snowflakes that appear to enter the movie theater. The images are intense and stunningly beautiful. The photography enhances every nuance of the characters and the development of the story.

Time Is Not the Healer

When Tomas accidentally kills a boy, he can only deal with it initially in the worst possible way—by attempting suicide.

Restrained and self-absorbed, he’s a man of few spoken words. His girlfriend Sara (Rachel McAdams) finds out about the details of the accident months later. Their long-strained relationship eventually breaks apart. The deal-breaker, she wants children; he cannot have children or does not want to have children with her. It’s not clear.

While others may question his motives or find him not easy to live with, like his second girlfriend Ann (Marie-Josée Croze), Tomas is confident about who he is and what he is: Writing is his raison d’être. But while writing brings him recognition, it doesn’t relieve him of his suffering.

The most developed dialogue, and one of the most satisfying parts of the film, happens between Tomas and Kate (Charlotte Gainsbourg), the grieving single mother of the boy he blamelessly killed. Kate shows compassion toward Tomas—both are bound by the same tragedy.

Kate forgives him as much as she comes to terms with her own grief, while living a rather solitary life working as an illustrator at home and as a mother of her youngest surviving son, Christopher (5–8-year-old Jack Fulton; 12-year-old Philippe Vanasse-Paquet).

Perhaps Wenders made this film … with the hidden agenda of wanting to provide … a springboard for viewers to look into their own lives.

Four years after the accident, Tomas becomes a more celebrated, famous novelist with his third novel. When he visits the scene of the accident, he runs into Kate. She asks him poignant questions, while still showing her scarified grief.

Gradually the dialogue develops, with plenty of silences for viewers to insert their own interpretations of what is transpiring within and between them. Apart from Tomas promising Kate that he would do anything to help her because it would make him feel better, the nonverbal communication says so much more.

During another visit, Tomas looks at a drawing Christopher made, depicting the moment when he had carried the shell-shocked boy on his shoulders right after the accident. The emotionally charged image reoccurs a third time, toward the end of the film when Christopher, at the age of 18 (Robert Naylor) asks Tomas if the part in the novel where a boy is carried on a man’s shoulders, if that’s him. Tomas does not confirm that, echoing what his publisher (Peter Stormare) told him about the paradox of being a writer. Anything in life could influence the writing, but the writing isn’t an exact reflection of life itself.

Christopher, who’s had his own share of emotional baggage to deal with, having witnessed the death of his brother and yearning for a father, is hung-up on Tomas. Toward the end of the film he acts out, in stalker-fashion, resulting in a suspenseful and touching boyhood-to-man confrontation with Tomas.

And They Lived Happily Ever After …

Wim Wenders has entered a class of his own with the use of 3-D to create a narrative drama feature. He has ventured into unexplored territory, showing a process that is ineffable, even for those experiencing or witnessing it. He felt that the hyper-realism of 3-D was very fitting for revealing “something that happens very much inside somebody,” he said.

This German-Canadian-French-Swedish-Norwegian production is geared more toward a European sensibility for a drama unfolding than for anyone expecting a blockbuster film-narrative structure. Still, “Every Thing Will Be Fine,” is indeed a fairy tale, albeit a serious one for adults showing how the best qualities of a person’s character can play out in the face of unexpected tragic events.

It shows abundance and generosity, despite the inevitability of suffering in life. The moral upshot is that you have to face the consequences of your own actions, otherwise they will come back to haunt you in the most unexpected, even quirky ways.

The film ends as it begins with sunbeams, not on a notebook, but on a warm smiling Christopher cycling away and a smiling Tomas walking straight toward the camera. It leaves one hanging a bit. Perhaps Wenders made this film, like many of his other films, with the hidden agenda of wanting to provide some kind of catharsis, or a springboard for viewers to look into their own lives.

“Every Thing Will Be Fine,” will show at the IFC Center in Manhattan for one week only, Dec. 4–10.