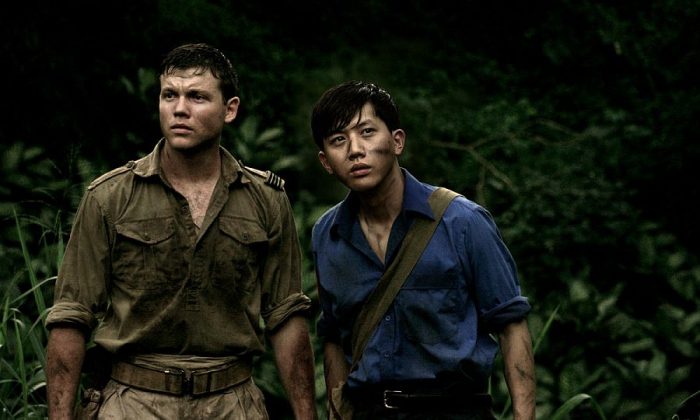 War is a personal business
By Joe Bendel

Australia and Singapore enjoy close diplomatic and economic ties. There is a free trade agreement between the two countries, and Singapore provided assistance to Australia’s Afghanistan deployment.

It is a special relationship forged in World War II by soldiers like the two protagonists of Aaron Wilson’s intimately experiential “Canopy.”

For a pilot like Jim, being shot down over the dense jungles of Singapore is a double-edged sword. The thick vegetation provides natural cover, but it is an unforgiving and disorienting environment.

It makes it difficult to distinguish friend from foe, which becomes an issue when he encounters Seng. Somehow, he conveys to Jim that he is a Singaporean-Chinese soldier trapped behind enemy lines. An alliance is quickly forged, but few words are exchanged. Even if they were not stealthily evading the Japanese patrols, they could not understand each other anyway.

With its near complete lack of dialogue, Nic Buchanan and Rodney Lowe’s stunning sound design, and Stefan Duscio’s ominously beautiful cinematography, “Canopy” is likely to generate comparisons to Terrence Malick.

It is a richly crafted film, but it is also a taut viewing experience that packs a real emotional wallop. With incredible subtlety, Wilson implies that whoever survives the long dark night will honor the memory of their fallen nocturnal comrade for the rest of his life. Clearly, the length of time is not important in “Canopy.” Rather it is the intensity that matters.

Frankly, it is quite a compliment to contend that the film’s 84-minute running time (including credits) actually feels short, given its quiet wordlessness and the measured deliberateness with which Wilson submerges viewers in the murky setting. Yet, just as it is for Jim and Seng, “Canopy” is over before you know it.

Given Wilson’s approach, “Canopy” necessarily entails a distinct acting challenge for his two co-leads, but they rise to the occasion quite impressively. For Khan Chittenden, looking like a younger Matt Damon is probably both a curse and a blessing, but such cosmetic matters quickly melt away in Wilson’s jungle.

As Jim, he expresses the film’s spirit of solidarity in a way that is genuinely moving. Likewise, the Taiwanese Mo Tzu-yi is silently eloquent and utterly believable as the wounded but resourceful Seng.

Co-productions are all the rage right now, but unlike Hollywood courting China, audiences can feel good about what this Australia-Singapore joint venture represents. “Canopy” violates nearly every war movie convention, yet it better represents the realities of combat than most of its forerunners.