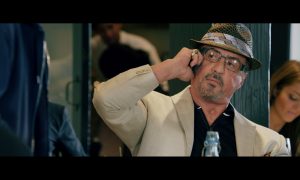 They do the jobs penguins just won't do
By Joe Bendel

With about 1,200 residents at peak capacity, McMurdo Station is the New York City of Antarctica. It is by far the largest of the small research facilities scattered throughout the frozen continent.

A satellite communications engineer by trade, New Zealander Anthony Powell became an accomplished photographer and budding filmmaker during his 10 years stationed in Antarctica. He had to do something to pass the time, besides marrying an American co-worker.

He documents both its vast unspoiled natural beauty as well as the hardy but diverse people who make some kind of a home there in “Antarctica: A Year on Ice.”

Yes, it gets cold down there. In fact, “Year” would not be possible were it not for the inventive new techniques Powell developed and his general talent for jury-rigging cameras. Nature lovers will ooh-and-aww at his time-lapse photography, but the film is even more interested in Powell’s colleagues and neighbors, making it a close cinematic cousin of Werner Herzog’s “Encounters at the End of the World.”

Yet, Powell is more egalitarian, focusing on the accountants, firemen, and shopkeepers who perform “conventional” jobs in one of the most remote corners of the world.

Through his footage and their anecdotes, Powell gives viewers a vivid sense of life in the extreme southern latitudes. Again, it sure gets cold, but it is the wind that really gets to you. Stir-craziness is a fact of life, but everyone seems to pull together into an easygoing community. Tellingly, it is things like rain and avocados that people really look forward to during their visits home.

Frankly, Powell’s film is much more impressive visually than Herzog’s tourist look-see. However, there are no grand themes to “Year,” just a bemused fascination with the everyday adventurism of his colleagues. There is a sense they all belong to a gender-neutral fraternal order of ice dwellers, whose shared experiences bring them back season after season.

Fear not, Powell also films plenty of penguins, which just about anyone going to an Antarctica documentary will want to see.

Even though the elements added a significant degree of chance into the equation, Powell still captures some amazing images. Arguably, he should win best cinematographer awards across the board, because who else can claim shots like these?

Technically, it is far superior to an average installment of PBS’s “Nature,” but it has the same general niceness and similar tacked-on messages regarding conservation and climate variance.

Recommended for fans of nature docs and History Channel extreme-jobs reality programming, “Antarctica: a Year on Ice” opens this Friday, Nov. 28, in New York at the Village East.