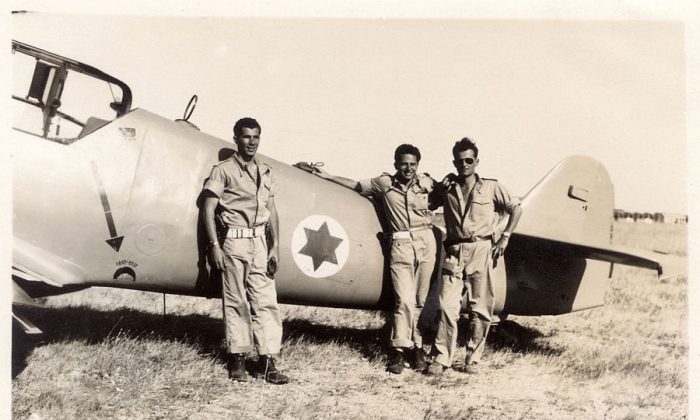 Pilots Lou Lenart, Gideon Lichtman, and Modi Alon in “Above And Beyond,” which documents the formation of the Israeli Air Force. (International Film Circuit)
Entertainment

Film Review: ‘Above and Beyond’

Twice they answered the call to protect democracy, prevailing against the odds each time. In 1948, a number of former American World War II military pilots volunteered to fly for the fledgling state of Israel when it was under attack from nearly the entire Arab world.

They were vastly outgunned and outnumbered, but their experience and sheer guts became game-changers. Director Roberta Grossman and producer Nancy Spielberg (sister of the other Spielberg filmmaker) chronicle the birth of the Israeli Air Force in “Above and Beyond.”

When the Arab nations launched the War of 1948, it looked pretty grim for Israel. The Israeli military did not have a single plane to its name, but the Egyptians had an extensive fleet. Rectifying the situation would be a tricky business.

Although President Truman supported the creation of Israel, his foreign policy advisers were much less enthusiastic. In fact, they pushed through an arms embargo, ostensibly for the entire region, but disproportionately falling on the almost entirely unarmed Israel. It was not like there were not plenty of surplus fighter planes leftover from World War II.

Fortunately, engineer Al Schwimmer (formerly with TWA and Lockheed) devised a plan to smuggle planes from America to Israel.

Of course, he also had to recruit pilots, such as Lou Lenart, whose Lindberg-like flight over the Mediterranean serves as the film’s gripping prologue. They were not just risking their lives; they were also risking their American citizenship and perhaps even their liberty for violating the Neutrality Act, but they had their reasons.

While not necessarily ardent Zionists, most predominantly but not exclusively Jewish volunteers were determined to avoid a repeat of the Holocaust’s genocidal horrors. However, they were still military aviators, with all the swagger you would expect.

“Above” documents a truly desperate time in Israeli history, yet it is also hugely engaging, thanks to the boisterous reminiscences of the surviving volunteers. They all have great stories to tell, but Grossman and Spielberg were particularly blessed by the documentary gods when they sat down with Gideon Lichtman, who couldn’t tell a boring story if he tried.

Through its first-person interviews and supplemental commentaries, “Above” assembles a full portrait of Squadron 101’s early days that is chock-full of fascinating episodes. Shrewdly, it refrains from playing the conspiracy card with respects to the untimely death of legendary ace Canadian volunteer Buzz Beurling, but its straight reporting of the facts still makes you wonder.

This is a flat-out terrific film that is not ashamed to celebrate heroism and derring-do attitude. Indeed, it is truly inspiring (and often wickedly funny) to hear the volunteers recount their exploits. Grossman and company have crafted a fitting platform for their oral history, supplying solid historical context and some surprisingly cinematic visuals.

Rigorously researched and wildly entertaining, “Above and Beyond” is very highly recommended (especially for students) when it opens this Friday, Jan. 30, in New York, at the Village East.